Kinder Morgan (KMI) reported its second-quarter results after the closing bell. The company’s earnings topped analyst estimates as profits jumped 50% to $0.21 per share, while revenue rose modestly by 1.8% to $3.42 billion missing the consensus. The company’s share price rose marginally in the extended hours of trading.

The company took a hit of $653 million due to impairment of assets, which resulted in $180 million loss on a GAAP basis. Of the total costs, $600 million was due to the impairment charges recorded for assets in Oklahoma.

The board declared a $0.20-per-share dividend, 60% higher than last year. Distributable cash flow (DCF), one of the key metrics to watch, came in at $0.50 per share, up 9% compared to last year and down sequentially about 11%. 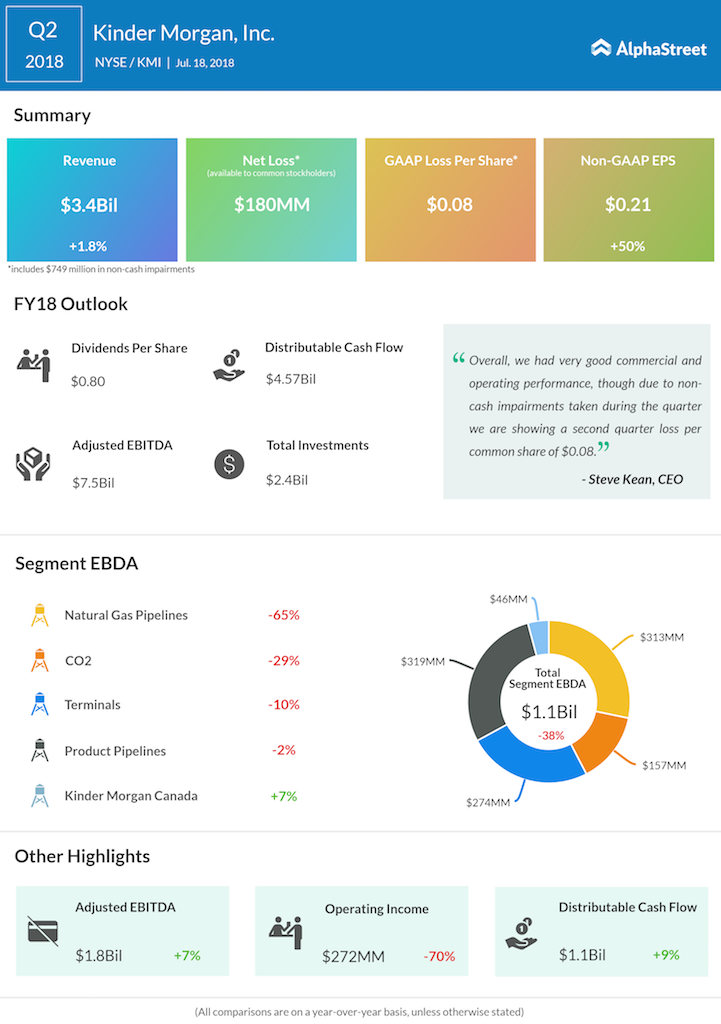 The company has the largest natural gas pipeline network in the US generating stable long-term revenues. Natural Gas division saw 11% growth in adjusted earnings, which is a major earnings contributor to Kinder Morgan.

Kinder Morgan announced in May about its plans to sell the controversial and delayed Trans Mountain Pipeline project to the Canadian government. As part of the deal, the company will receive $3.5 billion and help the government in finding a potential buyer by July 22nd. The energy giant expects to close the deal later in the year, which is expected to strengthen its balance sheet.

Debt burden remains a concern for Kinder Morgan’s balance sheet. At the end of the second quarter, total debt (long and short-term) remained flat at $36.7 billion compared to $36.8 billion last year but reduced slightly compared to the previous quarter. Once the Trans Mountain deal is closed, the debt burden is expected to ease by $2 billion.

Kinder Morgan expects 2018 DCF to come in at $2.05 per share and EBITDA, on an adjusted basis, around $7.5 billion. It also had accounted for paying $0.80 as dividends for the year. The company now expects to beat its leverage ratio of 5.1 times for the year. In the last 12 months, the pipeline giant’s stock is down nearly 9% and in 2018 it has declined about 2%.