An uptick in overseas sales pushed up Kraft Heinz’ (KHC) adjusted earnings in the second quarter, which also came in above Wall Street forecasts. Shares of the packaged food company climbed more than 6% in the pre-market following the announcement.

Adjusted earnings moved up to $1 per share from $0.98 per share in the second quarter of 2017, exceeding analysts’ estimates. Earnings benefitted from lower income tax rates. Meanwhile, reported net income dropped to $756 million or $0.62 per share from $1.16 billion or $0.94 per share last year, hurt mainly by non-cash impairment charges. 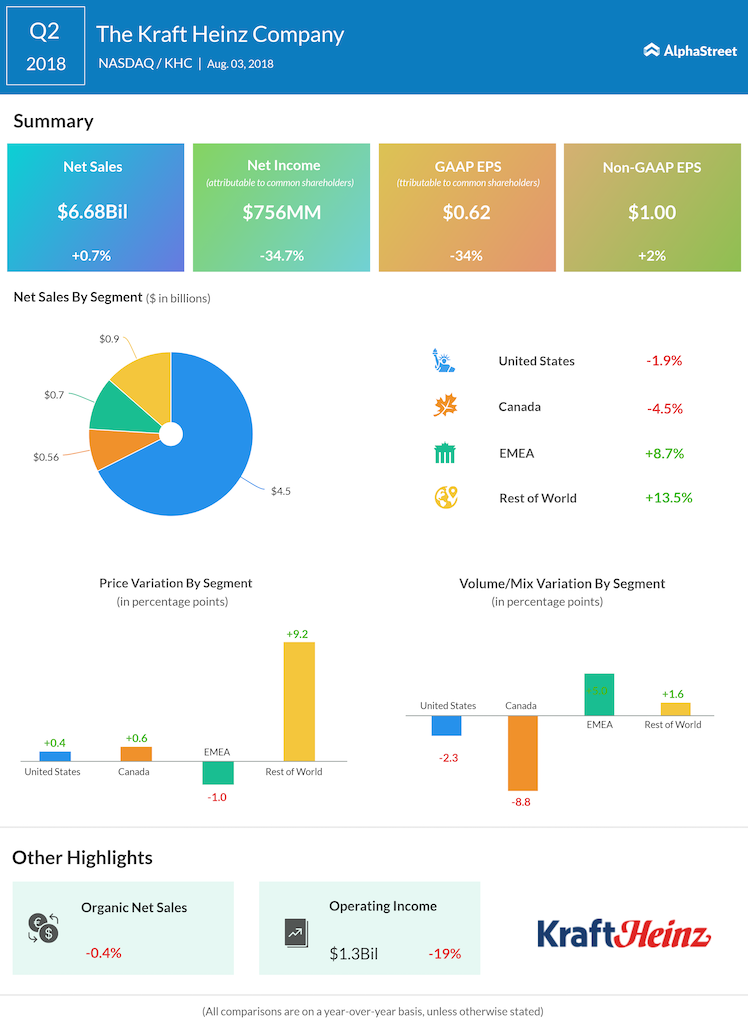 Net sales edged up 0.7% annually to $6.69 billion and surpassed expectations, while organic net sales declined 0.4%. The top-line benefitted from acquisitions & divestitures and favorable exchange rates. Continuing the recent trend, sales declined in the US and Canada but increased in other geographical regions.

“We believe we are now in a position to drive sustainable top-line growth from a strong pipeline of new product, marketing and whitespace initiatives that are backed by investments in capabilities for brand and category advantage,” said CEO Bernardo Hees.

In recent years, the company’s revenues were negatively impacted by the changing consumer habits even as it continued to lose market share to the smaller players entering the market.

The company said it expects the ongoing product revamp and marketing efforts will revive sales momentum by year-end, overriding the squeeze on profitability from the rising cost inflation.

The market has been upbeat ever since Kraft Heinz hinted at fresh merger talks with rival food company Campbell Soup (CMP), a proposal that was shelved and revised several times in recent months. It is speculated that Kraft would benefit significantly from the synergies if the company adds Campbell into its fold.

Kraft Heinz shares lost about 31% over the past twelve months. The stock, which had gained momentum ahead of the earnings release, rose sharply in the pre-market trading Friday.