When Kohl's reports second-quarter results on August 18, the market will be looking for a decline in earnings

Kohl’s Corporation (NYSE: KSS) has been on investors’ radar ever since the retailer put itself up for sale earlier this year, after coming under pressure from activist investors. Putting an end to speculation, the company recently ended sale talks with the lead bidder and decided to maintain status quo.

Considering the lingering uncertainty, it might not be an appropriate time to buy the stock now. Rather, it is advisable to keep an eye on the developments and make investment decisions accordingly. Of late, the management has been facing criticism from several quarters, especially the key stakeholders who demand a change in the way the apparel retailer operates.

Now, it is almost certain that Kohl’s would either change hands and become a more efficient business or, it would flourish under the current leadership by adopting a new business strategy. In either case, shareholders can look for handsome long-term gains, given the store chain’s solid fundamentals and strong presence in the market.

Meanwhile, KSS traded higher early Thursday amid reports of a leading investment firm reducing its stake in the company. After hiking the dividend regularly for over a decade, the management slashed the dividend last year but restored a part of it a few months ago. Currently, the yield is an impressive 6.4%.

Kohl’s has effectively dealt with the pandemic woes by adopting technology and is constantly ramping up its digital channel to align the business with the shift in customers’ shopping behavior. Currently, it is busy expanding multichannel capabilities like self-pickup services and making them available to more customers. 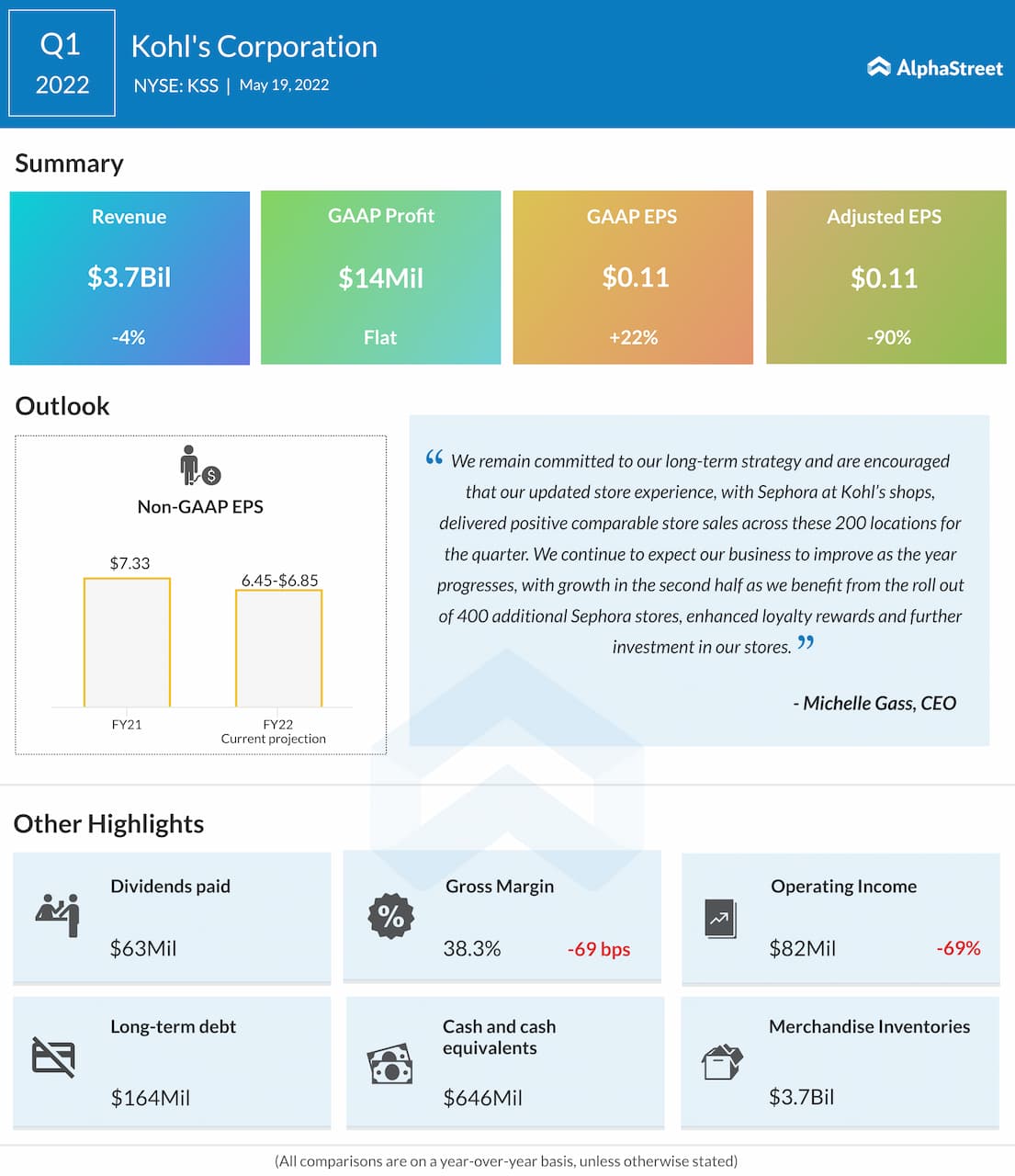 In the quarter ended April, adjusted earnings plunged to $0.11 per share from $1.05 per share in the same period of last year. The year-over-year contraction reflects a 4% decline in revenues to $3.7 billion. The results also fell short of the market’s expectations, reversing the positive trend seen over the past two years when earnings beat in every quarter. Expecting the weakness to continue in the remainder of the year, the company forecasts full-year adjusted earnings below last year’s levels.

Last month, the management announced the termination of sale talks with Franchise Group, which owns the popular Vitamin Shoppe, citing ‘deterioration’ of the retail environment since the bidding process started. Recently, the store operator forged a partnership with Buffalo David Bitton, a division of Iconix International, to sell premium denim outfits as part of its efforts to diversify and enhance that segment.

“Looking ahead, we’re expecting that our children’s business will improve through the remainder of the year. Spring seasonal performance has improved significantly so far in May. In addition, we are rebalancing the assortment to include more fashion, and we’re launching new in-store licensed entertainment product zones in 400 stores this month to capitalize on the strong pipeline of upcoming entertainment releases.”

It is estimated that the company earned $1.14 per share in the second quarter of 2022, which is about half of the profit recorded a year earlier. Market watchers also predict revenues of $3.85 billion for the quarter, results for which will be published on August 18 before the opening bell.

Kohl’s stock closed the last session sharply higher, around $31, after rebounding from the recent dip. It had entered 2022 on a positive note, but pulled back in the early weeks of the year and has lost 36% so far.