Line between telecom and media is already starting to blur

Telecommunications and media are probably the two sectors that benefitted the most from President Donald Trump’s new industrial policy. The diverse formulae being tried out by companies to combat pricing and competitive pressures have resulted in the emergence of a new trend, which according to experts could revolutionize the way information and content are distributed – the convergence of telecommunication and media.

And, the buyout of Yahoo by Verizon (VZ) in a landmark deal last year made others also pursue similar combinations. We also have the success story of Comcast Corp. (CMSCA) transitioning from a cable service provider into a media giant after adding NBC Universal into its fold a few years ago.

Meanwhile, had it not been for the regulatory and legal hurdles, by now AT&T (T) and Time Warner (TWX) would have scripted history by clinching one of the biggest mergers involving the telecom distribution and content segments. The $85-billion transaction is currently pending for regulatory and antitrust clearance.

There are several positive factors on which companies pursuing M&As in 2018 and beyond can pin their hope, such as relaxation of the norms by the Federal Communications Commission, the telecom regulatory body constituted recently, and the government’s decision to expand broadband connectivity in rural areas.

Apparently, the favorable conditions have instilled a renewed appetite for consolidation among the major players, be it AT&T, 21st Century Fox or Disney (DIS). Meanwhile, companies will have to deal with the deepening drag on revenues from lower wireless service prices while taking prudent decisions with regard to the choice of partners and bid prices. Another potential headwind is the huge costs of upgrading wireless networks to the 5G format, which is being adopted rapidly across the country. 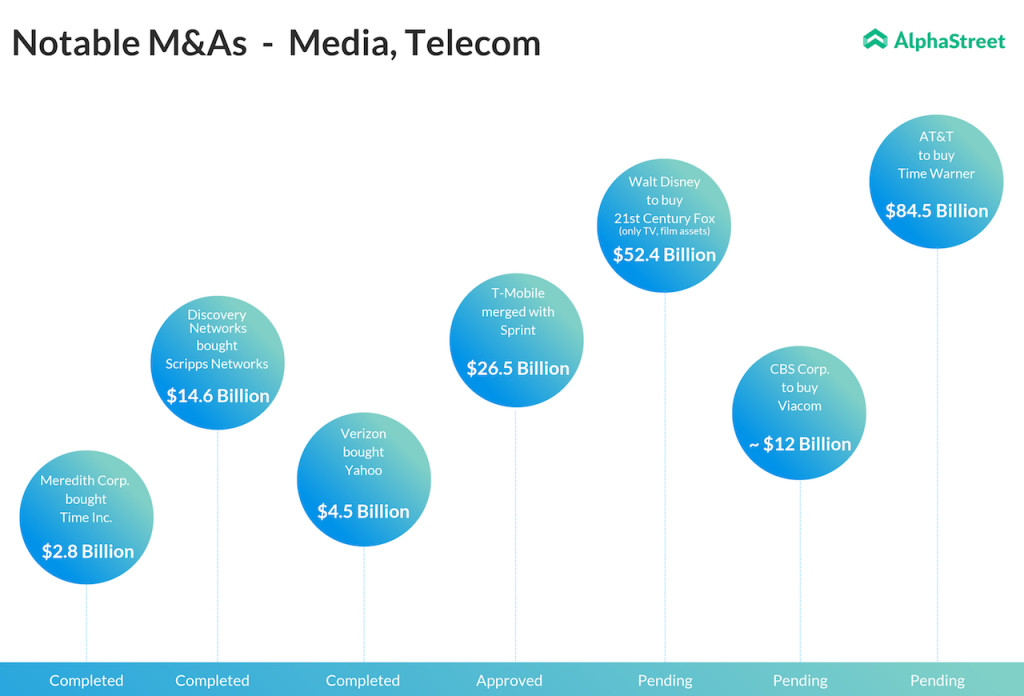 Bulking up to succeed

In what could be a game-changing combination, T-Mobile US (TMUS) and Sprint Corp. (S) agreed for a $26-billion merger in April, marking the fruitful culmination of their multi-year negotiations and reducing the number of major telecom players to three – T-Mobile, Verizon and AT&T. The combined network of the companies is expected to help them sail through the transition to 5G.

Now, let’s see what 2018 holds for the fast-changing telecom-media landscape. The most closely-watched among the proposals currently in the pipeline is Walt Disney’s (DIS) $52-billion bid for the television and movie assets of 21st Century Fox (FOXA). The deal became a hot topic after cable TV giant Comcast (CMSCA) made an unexpected entry into the scene by offering a higher price to snatch Fox from the hands of Disney.

While the owners of Fox prefer Disney over Comcast, it is too early to say ultimately who will own Fox’s rich collection of shows and films, which Disney has long been eyeing for countering competition from rivals like Netflix (NFLX) and Amazon (AMZN).

There is speculation that once Fox’s assets change hands, it would negatively impact the firm’s popular movie franchises like X-Men, Deadpool and Fantastic Four, as well as their cast and crew. Also, there are concerns among stakeholders over the fate of the many films the company is currently making and those in the conceptual stage.

In a similar fashion, a deal between two peers in the content segment ran into rough waters for multiple reasons, including a legal tangle. A recent attempt to recombine CBS Corp. (CBS) and Viacom (VIAB) by National Amusements and its chief Shari Redstone, the controlling stakeholder in both companies, met with strong resistance from the CBS board, which thinks the deal is not in the best interests of shareholders. Adding to the dramatic events that unfolded ever since the merger proposal was made two years ago, CBS sued Redstone and her company for forcing through the deal.

With CBS resisting Redstone’s attempts, reminding her that reversing the break-up is not as easy as the split, there is a remote chance of the merger materializing.

The driving force behind the M&A spree is the general perception that consolidation is the most viable option to minimize the impact of the rising costs on margin. Then comes the market, where technology and operating dynamics are undergoing a sea change over the years. By staying together, companies can access new markets and expand their operations there, while also offering customers multiple services like wireless network and TV content in a comprehensive manner.

Moreover, in a scenario where spending capital on new technologies such as 5G is inevitable, easy access to credit is important. And it becomes a lot easier for companies with larger market values to avail bank loans on moderate interest rates.