Lockheed Martin (LMT), the biggest defense contractor in the country, reported a 22% jump in earnings for the second quarter driven by broad-based sales growth. The top and bottom line came in above analysts’ expectations. Encouraged by the upbeat results, the company also raised its sales and earnings outlook for fiscal 2018.

Following the announcement, shares of the aerospace company gained 2.72% in the pre-market, after trading lower in the last trading session.

Net earnings climbed around 23% to $4.05 per share during the three-month period from $3.28 per share a year earlier. The latest quarter earnings included special charges for severance and restructuring activities that lowered earnings by $0.26 per share.

Sales of the Aeronautics division rose 8% to $5.3 billion helped by strong demand for the F-35 and F-22 aircraft. This was partially offset by lower production volume for the C-5 aircraft as the current modernization program nears completion.

Missile and Fire Control systems sales grew 17% to $2.1 billion, aided by an increase in the volume of classified programs, tactical missiles programs, sensors and global sustainment programs, as well as air and missile defense programs.

Sales of the Rotary and Mission Systems unit inched up 4% during the quarter, while Space segment sales declined 1% due to lower volumes for government satellite programs and for commercial satellite programs.

Only a day back, Lockheed has said it hired over 1,800 new employees in support of the F-35 program, meeting its hiring commitment made in January 2017. The company plans to create an additional 400 jobs at its Fort Worth, Texas, facility to support increased production on the program. This is in conjunction with the President Donald Trump Administration’s second Made in America day.

Related: Strikes high with the F-35

Northrop Grumman (NOC), another leading defense technology company, is scheduled to report its second-quarter earnings before the market opens on Wednesday. 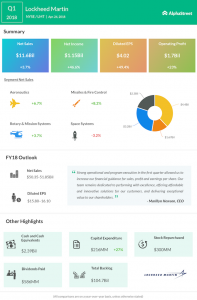