Shares of Macy’s Inc. (M) were up 9% during the pre-market trading after it reported upbeat results for the first quarter and raised the outlook for the year. Macy’s stock, which jumped about 27% so far this year, spiked 7% when the market opened today. Net sales increased 3.6% to $5.54 billion compared to last year. Comparable sales on an owned basis were up 3.9% while comp sales on an owned plus licensed basis were up 4.2%. 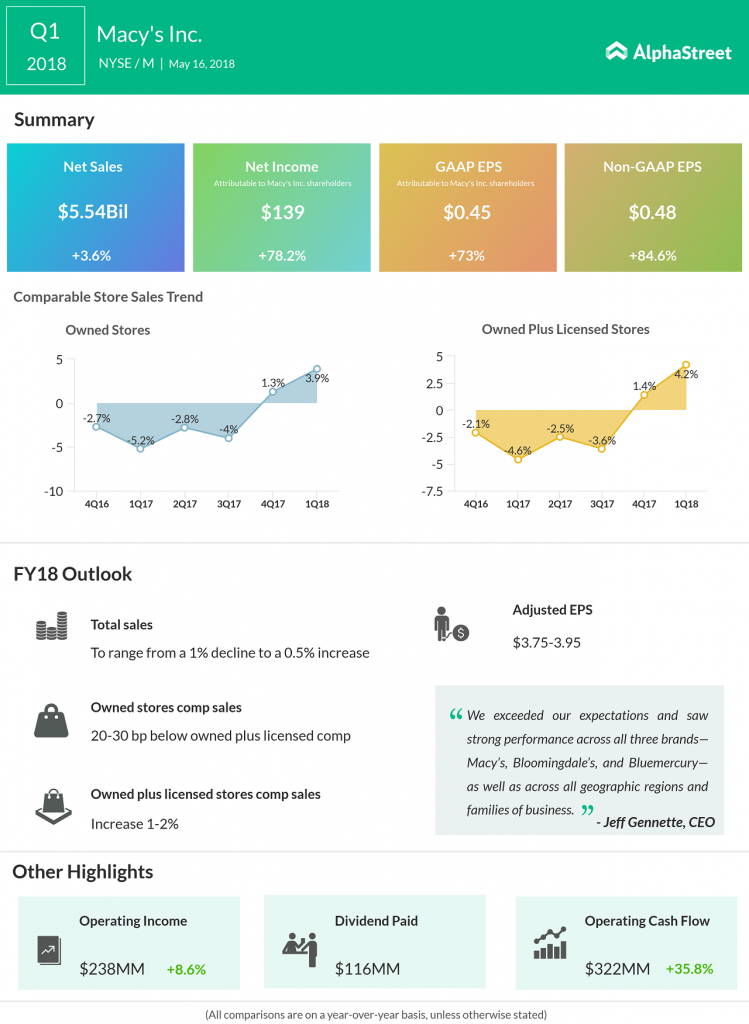 The Cincinnati-based retailer said the results exceeded its expectations and performance was strong across all brands and geographical regions. Inventory is in a stable position while physical stores along with the ecommerce and digital channels continue to perform well. Macy’s digital business grew in the double-digits during the quarter.

Macy’s decided to end its JV with Fung Retailing Limited in China but will continue to operate on TMall and other social media platforms.

The company, which battles with retail giants like Amazon (AMZN) and Walmart (WMT), lifted its guidance for the fiscal year 2018. Currently, adjusted EPS is targeted to be $3.75 to $3.95 compared with the previous guided range of $3.55 to $3.75. Total sales are expected to range from a 1% decline to a 0.5% increase in 2018. Comparable sales on an owned plus licensed basis are expected to increase 1-2%.

Despite the solid results, Macy’s is not safe from the Amazon effect, and neither are its peers. Macy’s is undertaking several initiatives to tackle this competition including focusing on Macy’s Backstage. The company’s acquisition of concept store Story is part of these efforts.