Department store chain Macy’s has finally woken up from a sales stupor, posting a gain in sales for its fourth quarter of 2017, after a period of three years.

Let’s face it. It was not a great time for the retail industry. Many retailers have been struggling to keep their heads above the water while the Amazon juggernaut threatened to drown them. The shift of customers’ preferences towards e-commerce put a burden on traditional retailers.

Several top retailers had to shutter stores and consider a major overhaul of their strategies. Macy’s too was part of this unlucky crowd.

One initiative to look out for is Backstage, Macy’s off-price concept. Backstage sells Macy’s brands at sharp concessions that go down to even 80%. Macy’s is planning to expand Backstage to 145 locations this year, including premium malls. Macy’s believes the concept is likely to appeal to a significant part of the millennial population.

Not long ago, the retailer had also introduced self-service in its shoe departments akin to Nordstrom Rack and TJ Maxx. Macy’s said most customers nowadays prefer to be left alone while shopping to do their own selection and trials so there is not much demand for customer service.

Macy’s has also seen some gains from its asset sales and is attempting to maximize the value from its real estate portfolio. The store chain owner announced that it is selling the top floor of its State Street store in Chicago for $30 million to Brookfield Asset Management. The deal is expected to be completed by midsummer.

This step is part of a plan to find new uses for underutilized store space as well as to make gains on real estate. In addition to the Chicago store, Macy’s has other redevelopment plans with Brookfields. Macy’s is also looking to sell a part of its store space in the Union Square building in San Francisco.

However, not everybody is ecstatic over Macy’s good fortune this quarter. Some claim Macy’s still has to work hard to get back its share in the clothing and home furnishing markets. It also needs a better game plan on e-commerce.

There are others who believe that Macy’s has several opportunities to grow sales, one of them being its beauty chain Bluemercury. Perhaps Macy’s could pay more attention to Bluemercury as it seems to hold promise.

This is not the end of the road. Macy’s has a long way to go ahead but at least it appears to be on the right path. 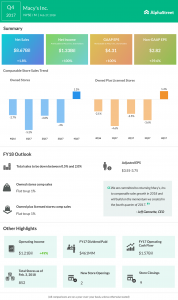