The Federal Reserve’s Report on the Economic Wellbeing of US Households in 2017 reveals that around 40% of Americans would not be able to afford an emergency expense of $400 without relying on a loan from somewhere or selling any of their possessions. Earlier this week, another study revealed that 43% of American households were unable to afford basic necessities. This is despite a decrease in the unemployment rate and an increase in financial stability.

The study also states that those who have a proper savings plan fall below the 40% threshold while 25% have absolutely no kind of retirement nest egg, putting them in a precarious position. The data, which was taken from 12,000 people nationwide, revealed that 74% of them lived in comfortable or at least satisfactory conditions in 2017. This is more than 10% from 2013 and 4% from 2016.

Student loans and credit card debt are the major obstacles in the path of a smooth savings plan for most people. The number of people with an IRA stands slightly over 30% while those with pension plans fall under 30%. Those who have pooled their earnings into business, real estate and other forms of money-making schemes which may or may not include the stock market collectively make up around 25%. 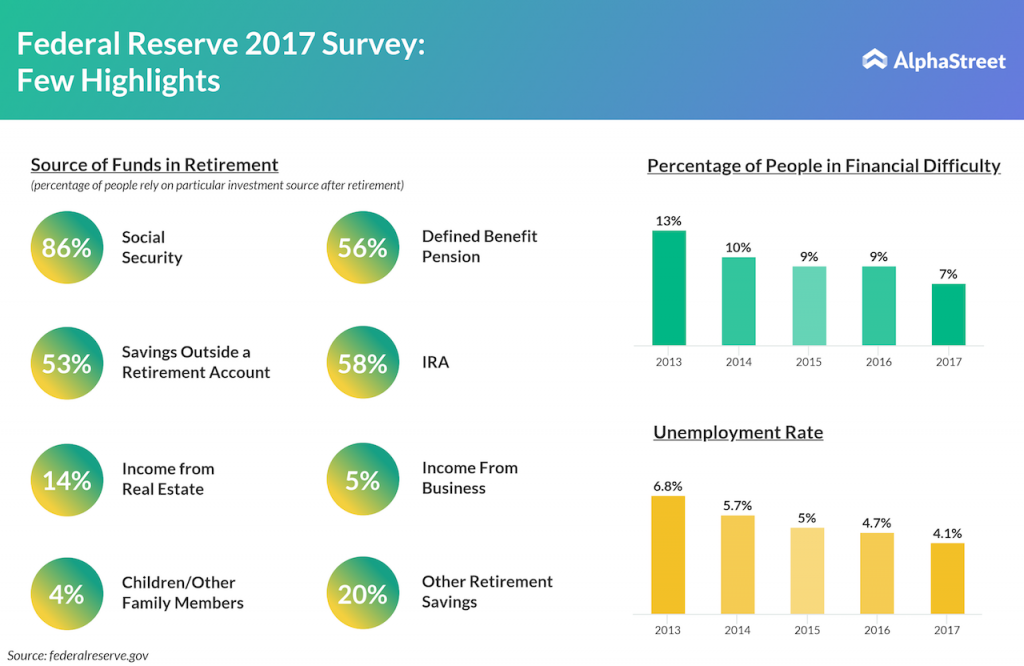 There has been an increase in financial stability under the Trump administration with low-income households benefiting the most. Not only households, small businesses too are seeing revenue growth which is helping to cement their expansion and hiring plans for the near future. The Fed’s findings included the study of around 8,000 small businesses. A majority of the companies expect their top line growth to continue and around half expect to be able to increase their headcount in the coming year.

Business growth and expansion along with consumer spending bode well for the economy as a whole. However, all is not well. A large number of people are facing difficulties in being able to afford basic amenities while a majority of the very small businesses are struggling with basic expenses. Many of these firms are hesitant to apply for loans.

For the first time, the Fed also included information on opioid addiction. Around one in five respondents claimed to know an opioid addict, with the issue being less pervasive among the minority communities. Those with exposure to the opioid epidemic held a less favorable opinion of economic conditions compared to others despite there being little difference in regional employment rates.

Fed officials believe the unemployment rate will fall further below the current 3.9% over the next two years. At present, among those who are employed, there is one section that gets regular work hours along with good wages and perks while another section faces irregular work schedules with low pay and benefits. The latter is forced to live on a tight budget having to forego necessities many a time. Despite all this, the Fed said the overall picture was positive and expressed optimism on the economic condition.