Match Group (NASDAQ: MTCH), the owner of Tinder, Match, PlentyOfFish, Meetic, OkCupid, OurTime, Pairs, and Hinge brands, is set to report its first quarter 2019 results on Tuesday, May 8, after the market closes. Despite growing competition from Facebook (FB) and Bumble, market watchers expect the growth in the average subscriber count to continue for Match Group and its leading brand Tinder. Match Group stock ended up 2.48% at $61.91 when market closed on Friday. 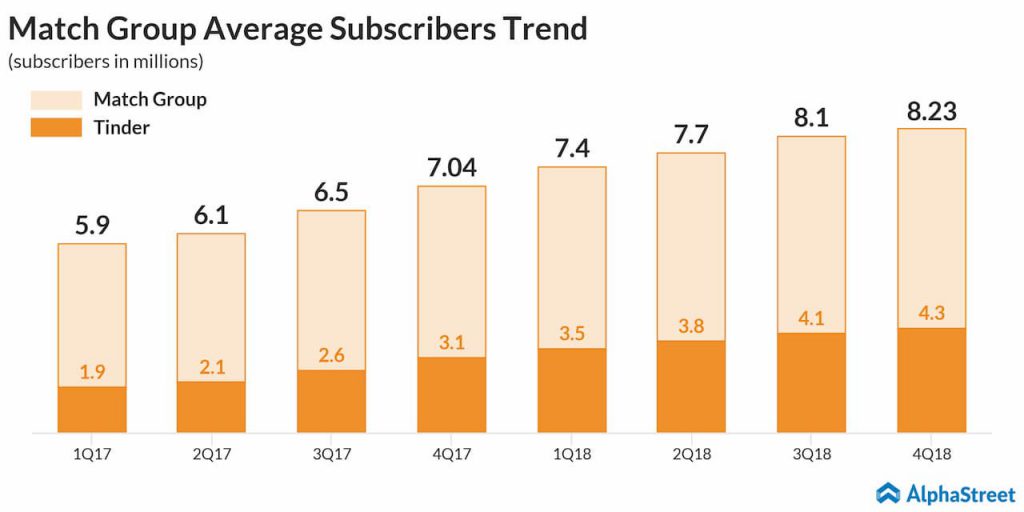 Match Group has got a massive opportunity in APAC, Africa, Middle East and LatAm regions with approximately 75% of global singles. It’s worth noting that two-thirds of singles in the above regions have never tried dating products.

On April 29, Match’s peer Momo (MOMO) got battered as Tantan, a similar app like Tinder, was banned by the Chinese government. Momo said in a statement that it will work with the authorities to restore the app. Momo stock has dropped 8% in the last one month.

For the year ended December 2018, Tinder’s revenue doubled year-over-year to $805 million. According to app intelligence firm Sensor Tower, Tinder beat Netflix (NFLX) in 1Q19 and became the world’s top grossing mobile app for the first time in more than two years. With 30 billion total matches and 2 billion views per day, Tinder app has been used in 190 countries worldwide. Investors expect Tinder to fuel the growth for its parent Match.