Marijuana stock analysis: You can predict a pothead. A pot stock, not so much.

A full month ahead of complete cannabis legalization in Canada (Oct 17, 2018), medical marijuana company Tilray (TLRY) took a wild trip on the market this Wednesday. The stock hit almost $21 billion in market cap in trading hours. But is it a good idea for you as an investor to join in on the smoking? Here’s what you need to know.

Rule of the short sellers

Yet to be determined if it is a bubble, the pot stocks are now in short selling territory. It makes for a very bad investment, per se. Pot stock shorting jumped 44% by the second-quarter end this year. And if you are a short seller, you need to worry too. Short sellers lost as much as $500 million this year in the sector.

Whatever the case, it is now a full-blown war between short sellers and the various medical marijuana corporations who don’t want their stock to be tools to market fluctuations.

Tilray, which opened 51% higher at $233 was partly due to unruly spikes and dips all through Wednesday, but the real fun began an hour and a half before closing. The stock skyrocketed more than 94% to hit a high of $300.
Share trading was halted on its account. When it resumed, the stock was on freefall – it shed almost all its gains 30 minutes before closing. Finally, at the market close, it was back at $214. There you go.

Keeping the “is marijuana good for you?” debate aside, let’s face reality. US regulations are still on tenterhooks about this one. Is it legal, is it illegal? Where is it illegal? Is selling illegal? Is buying legal? Do you need a prescription? There is no unified federal governance on this, and that puts the pot industry in a precarious position.

While the FDA did clear Tilray to export medicinal cannabis to US soil, California, for scientific research, it has a lot of fine print. “This is the first time a Canadian (licensed producer) has demonstrated to the FDA that a study drug produced in Canada from the cannabis plant can meet its standards,” said Dr. Catherine Jacobson, Tilray’s director of clinical research in a local interview. This could be a sign of good times ahead. But not necessarily a good time to invest.

This is where it gets tricky. Pot sale is still a very careful business. It also affects the returns. On paper, the valuations seem a little unreal. Take the Price-to-Sales ratio of the pot industry, for instance. 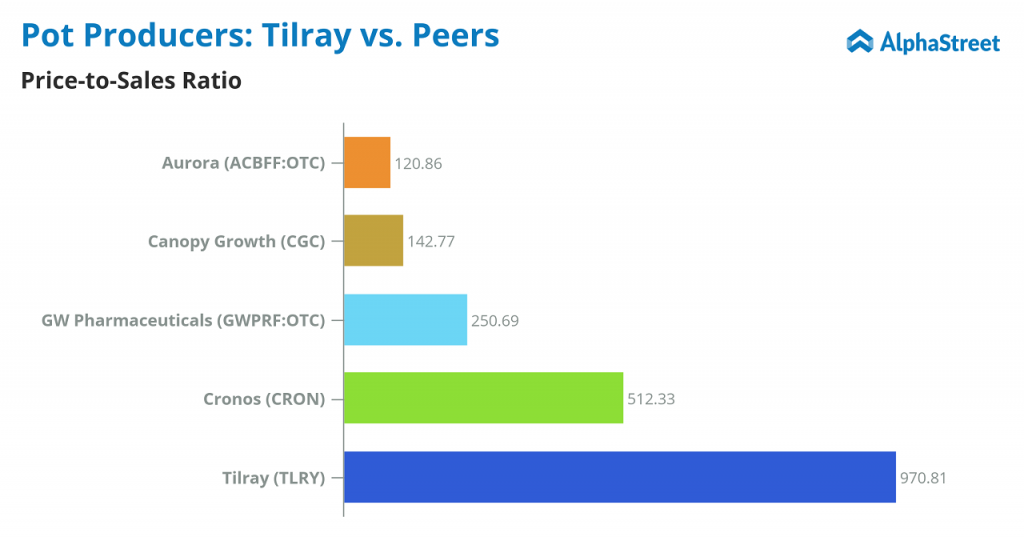 The valuation of Tilray necessarily does not translate to the rest of the industry. While hype does. If you listen around, there is huge chatter about Marijuana stocks. But that’s not a sign of a safe investment – that’s the sign of a bubble if any.

Don’t burn your roach just for a high

Extreme predictions, more chatter, and judging people who disagree with your analysis while not having a fair financial know-how about the subject are all signs of a bubble. While pot stocks are not there yet, it is showing a rather good tendency toward it.

Yes, Elon Musk smoked a split on a live podcast. But his security clearances are also being checked now due to it. (Sending stuff up the sky while being high doesn’t send a very assuring message, does it?) So take a breather and research more before jumping into investing in a pot stock. As it stands now, it is not advisable to put your money in it – lest you want to see it go up in smoke as well.

(DISCLAIMER: This analysis does not necessarily imply the views of AlphaStreet, and contains opinions of the author alone.)