Arizona-based chip maker Microchip Technology (MCHP) inched 1.88% during the pre-market trading after the company reported an upbeat result during the fourth quarter of fiscal 2018. The company, along with providing guidance slightly above market consensus, increased the quarterly dividend as well spurring the share movement.

With an 11% jump in its revenue to $1 billion, Microchip continued to maintain the trend of beating market estimates. This quarter, analysts expected the company to report revenues of $984.5 million. But the company posted a double-digit rise in total revenue, benefiting from the growing demand of its analog chips.

During the quarter, analog net sales came in at $242.3 million, making 24.5% of Microchip’s total net sales. 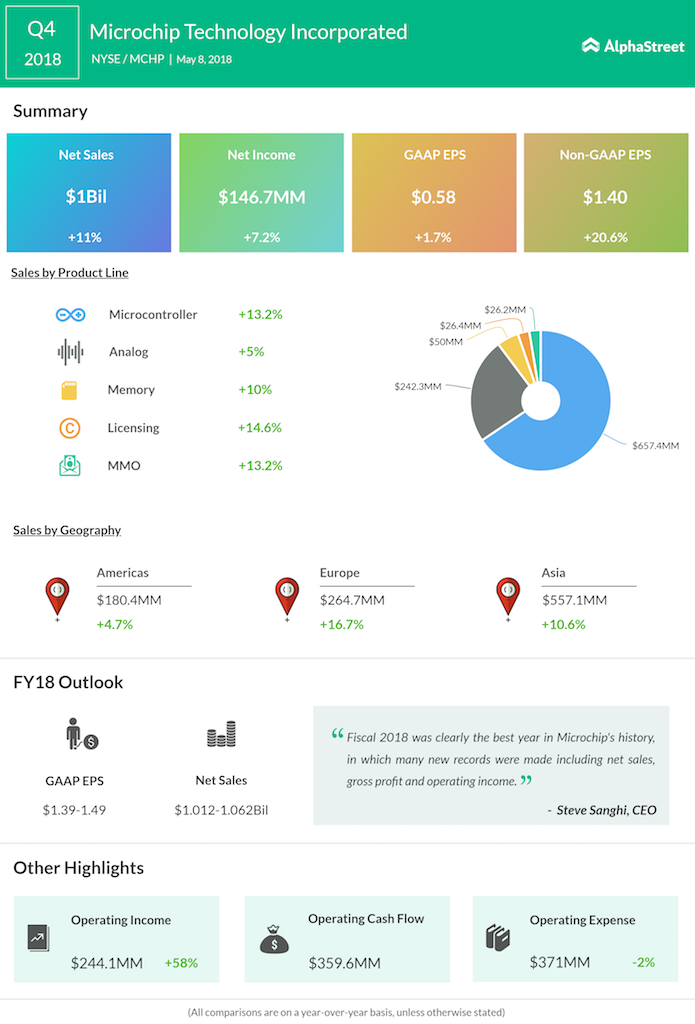 Based on the Gartner Dataquest market-share report for the calendar year 2017, Microchip was the recognized as the fastest growing microcontroller franchise, expanding nearly 2.5 times the rate of the market.

Microchip’s net income during the quarter came in at $146.7 million or $0.58 per share, an increase from $136.9 million or $0.57 per share during the prior year period. Excluding items, the company earned $1.40 a share, up 21% year-over-year. The previous year’s earnings were adversely impacted by purchase accounting adjustments associated with Atmel acquisition.

Microchip is spending close to $10.15 billion to acquire Microsemi. The deal, expected to close during the June quarter, currently awaits approval from regulators of China and other countries. Similar to its previous buy of Atmel, which boosted the company’s earnings growth, Microchip hopes the same with this latest acquisition.

Within a year of closing the deal, Microchip expects the purchase to boost its annualized earnings by $0.75 per share, and with the help of a projected $300 million in synergies, the deal is expected to hoist fiscal 2021 EPS by $1.75, according to The Street report.

“We expect several other countries to clear their anti-trust review this month. The Microsemi shareholder vote is scheduled for May 22, 2018, and we believe that we are on schedule for closing the acquisition sometime during June 2018,” said CEO Steve Sanghi.