Earnings of chipmaker Micron Technology (MU) increased sharply in the third quarter as higher product demand and strong execution pushed up revenues. Though the results beat analysts’ predictions, the margin was not wide enough to cheer investors and as a result, the stock lost 1% in the after-hours trading.

The Idaho-based semiconductor giant reported adjusted earnings of $3.90 billion or $3.15 per share during the third quarter, compared to $1.89 billion or $1.62 per share in the same period last year. On a reported basis, profit more than doubled to $3.10 per share. The bottom-line came in above street expectations.

Revenues jumped 40% year-on-year to $7.8 billion during the three-month period, surpassing market expectations. Revenues of the Compute & Networking unit and Mobile unit advanced 67% and 55% respectively. While revenues of the Embedded unit rose 28%, those of Storage unit was higher by 13% compared to the third quarter of 2017.

“We set new records for revenue in SSDs, Mobile Managed NAND and Automotive solutions along with Cloud/Enterprise and Graphics DRAM Memory. We see ongoing momentum and healthy industry fundamentals in the fourth quarter to close out an exceptionally strong fiscal 2018,” said Micron CEO Sanjay Mehrotra.

The company said it repurchased or converted $2.31 billion of its debt during the third quarter, reducing the overall carrying value of debt to $7.34 billion at the end of the period. 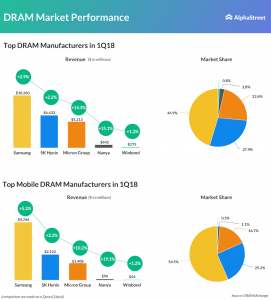 Shares of Micron, which surged to an 18-year high last month, rose 36% so far this year. However, a recent downgrade by Morgan Stanley (MS) and widespread concerns over the pricing of NAND products came as a damper and the stock retreated from its multi-year highs.

Micron ended Wednesday’s regular session slightly lower and lost further in the after-hours trading. Since the market sentiment was exceptionally bullish before the earnings release, investors seemed to have found the margin of the earnings beat is not up to their expectations.

In recent years, Micron’s market value rose steadily aided by the consistent demand for its products, especially in the AI, cloud computing and autonomous transport segments. Among the company’s peers, Lam Research (LRCX) and Intel (INTC) are scheduled to report results for their latest quarter on July 17 and July 26, respectively.