Move over, Apple! Amazon might be the first trillion-dollar company

Amazon.com Inc. (AMZN) is catching up fast with Apple Inc. (AAPL) in the race to reach $1 trillion in market value. Following a hugely successful Prime Day during which it sold 100 million products, Amazon’s market value touched $902 billion, reaching a huge milestone and increasing its capability to dethrone Apple from its position at the top of the list.

Apple has a market value of $944 billion at present, which does not leave much space between the iPhone-maker and the online retailer. Apple’s stock has increased 12% so far this year while Amazon has climbed more than 55%, marking a massive increase since the latter’s IPO in 1997. Both Apple and Amazon will report their quarterly results by the end of this month. The details of their share counts and stock buybacks is worth noting as these can cause shifts in the market cap.

Small and medium-sized businesses exceeded $1 billion in sales during Amazon’s Prime Day this year. The Instant Pot was the best-seller in the US. July 17 marked the biggest day for smart home product sales in the company’s history.

Amazon sees good strength in Amazon Web Services, and the company continues to make improvements in its grocery business with the help of Whole Foods. Amazon’s founder and CEO Jeff Bezos overtook Bill Gates last year to become the world’s richest man. Bezos’ net worth reached $150 billion earlier this week, making him the wealthiest man of our time.

Earlier this year, Amazon surpassed Microsoft (MSFT) to gain a position among the top three companies ranked by market value. Alphabet Inc. (GOOGL) has also managed to move ahead of Microsoft since then. After crossing the $900 billion mark briefly, Amazon’s value dipped to $886 billion on Thursday. 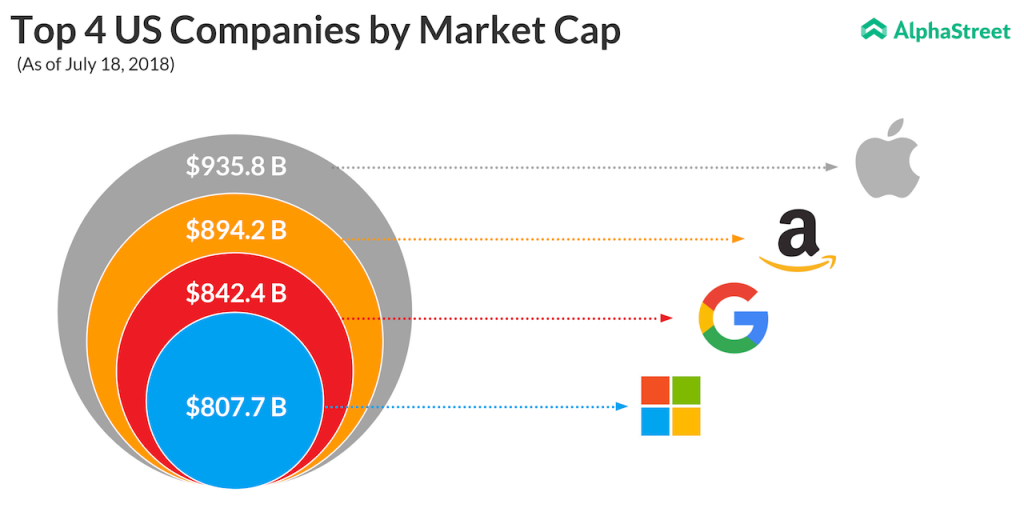