Netflix earnings preview: Get ready to hit the bull’s eye

Netflix (NFLX) is scheduled to report second-quarter results on July 16 after the closing bell and the bulls are getting set for a stampede. With the stock price that has more than doubled in the last one year and optimism at its peak, thanks to a series of price target upgrades, analysts and investors are keenly looking at how quickly the streaming giant is increasing its customer base. Cash burn is hardly affecting investors these days as the original content coming out of it is winning widely positive response.

The company had reported strong customer additions in the first quarter. It cruised past its own expectation of 1.45 million users in the domestic market by actually adding 1.96 million new users, busting popular belief that the US is a saturated market. Meanwhile, the international market is where Netflix’s true potential lies. During the first quarter, international additions rose a staggering 55% to 5.46 million. 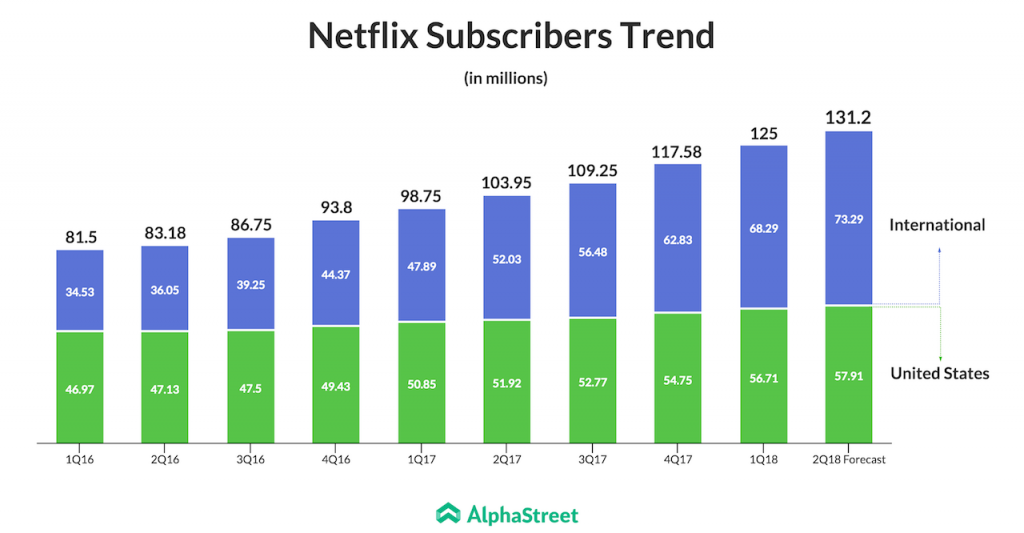 For the second quarter, the management expects to further add 6.2 million members of which, around 5 million is expected to come from foreign markets. It may be noted that Netflix is known for giving a conservative outlook, which helps it to consistently beat expectations. Going by the trend, the streaming giant should add around 7 million customers this quarter.

RELATED: 6 headwinds to Netflix’s growth that you neglected

Keep track of any management comments on the progress of its international expansion, especially in India, where internet consumption is seeing a tremendous increase.

While some analysts and many investors see Netflix as a high-valuation stock, not many seem concerned by its long term prospects. Meanwhile, the influx of promising entrants at regular intervals, as well as entry plans by some major companies including Disney (DIS) and Apple (AAPL), could pose threat to Netflix’s customer base in the long term. For the short term though, Netflix is the undisputed king.

During the second quarter, Wall Street expects Netflix to report revenue of $3.94 billion, 41% higher than what it reported last year. EPS is expected to jump five-fold to 79 cents per share. Operating margins are expected to more-than-double to 11.9% during this period.

We highly recommend you hit the bull’s eye this Monday.

Netflix at a glance – Inforgraphic