Netflix, Inc. (NASDAQ: NFLX)  has been spending heavily on content for quite some time, and the video streaming giant has once again proved that content comes first in entertainment business. The company’s subscriber additions topped expectations in the most recent quarter, mainly driven by the popularity of Squid Game, the Korean drama series that has become its most-watched television show.

The user growth underscores the effectiveness of the management’s international strategy with a focus on local programs, especially at a time when the COVID-driven demand boom seems to be fading. The impressive third-quarter performance brought cheer to shareholders, but the sentiment was dampened by the weak guidance.

Though Netflix’s stock made modest gains soon after the earnings announcement on Tuesday evening, it changed course and traded lower in the following session. NFLX is among the most attractive entertainment stocks and remains a favorite among long-term investors. Analysts are bullish on its growth prospects and predict a 7% growth for the 12-month period.

The on-demand platform has been tying up with producers and creative communities across the globe as part of the drive to produce local television shows and movies in around 45 countries. The global reach and widening audience put the company in an advantageous position from the perspective of competition. Squid Game could be another milestone in Netflix’s successful transition from a DVD-by-mail service to a streaming behemoth. 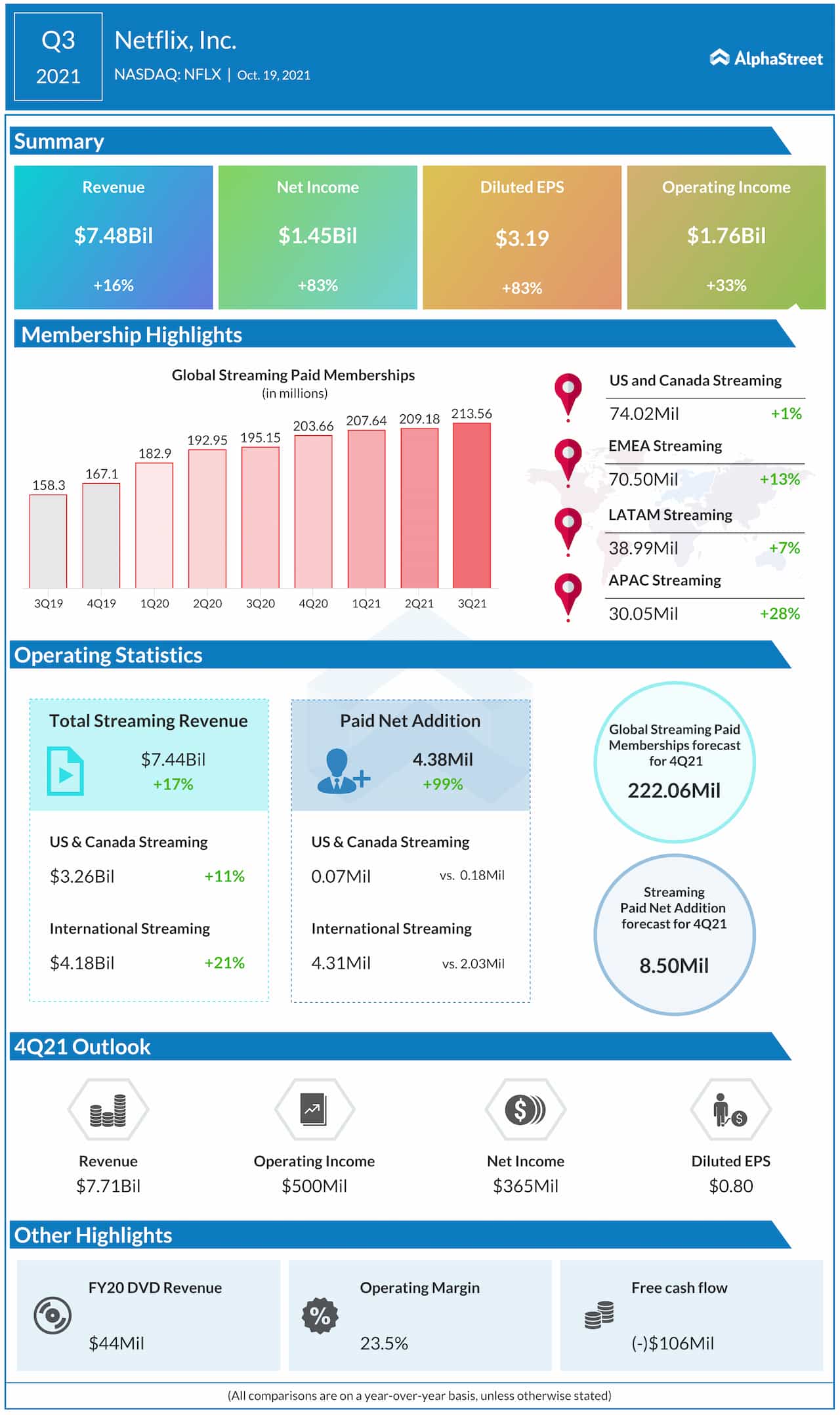 Over the past several quarters, the pandemic-induced subscription growth translated into revenues for the company. However, higher costs related to the acquisition and licensing of content restricted earnings performance that often fell short of expectations in the recent past. However, the company entered the current fiscal year on a positive note, signaling an improvement in margin performance.

“Coming up in the quarter, spin-out version of Call My Agent! from India, the Italian film The Hand of God, new seasons of Luis Miguel, so these are all shows that are meant to be hugely impactful and loved in the territory and if they really catch on, they travel a lot. But they really focused on making a difference and around the world, non-English content viewing has grown 3 times as we started in 2008 making content.”

Revenues increased 16% to $7.48 billion in the September quarter when Netflix added around 4.4 million new subscribers. Consequently, net profit climbed 83% year-on-year to $1.45 billion or $3.19 per share, which also beat the estimates. For the current quarter, company executives forecast net income of $365 million or $0.80 per share, which is sharply below the prior-year levels.

Meanwhile, due to the pull-forward in subscriber addition, which can be linked to increased content consumption during the crisis period, subscription growth will likely ease as market reopening gathers steam. Also, there is continuing uncertainty over production recovery, after experiencing delays in the recent past. Another concern is that the extensive content pipeline demands heavy investment, which in turn could be a drain on the company’s finances.

Taking a cue from the growing competition in the streaming space, especially after the entry of new players like Disney Plus, Netflix is busy diversifying its revenue sources. Last month, the company bought video game developer Night School Studio — its first-ever acquisition of a games studio.

In the past six months, Netflix’s stock moved up around 14% and reached an all-time high this month. The shares traded lower during Wednesday’s regular session, reflecting the management’s cautious fourth-quarter outlook, after closing the previous session at $637.97.