It is estimated that the mass adoption of digital technology during the pandemic would continue even in the post-crisis era. As a consequence of the widespread digital transformation, the demand for microprocessors has soared, to the extent that chipmakers are finding it difficult to fulfill customer orders. According to experts, the global semiconductor market will reach $522 billion in 2021, up 13% from last year.

The future looks bright for U.S semiconductor companies, given the growing adoption of artificial intelligence, quantum computing, and advanced communication technologies like 5G. While most semiconductor stocks registered strong growth during the boom time, some of them stand out from an investment perspective.

In the early days of the COVID-19 crisis, experts were cautious in their outlook on the industry which had ended 2019 on a low note after the prior year’s record performance. But concerns about the virus-induced supply chains issues and cyclical factors soon gave way to optimism even as market conditions changed. The fact that memory chips have become an integral part of most technology-based products and services — from communication to automobiles — explains the unexpected rally the industry is witnessing.

The growing chip demand globally has created a unique opportunity as far as investing in semiconductor stocks is concerned. Among the top players, Intel Corp. (NASDAQ: INTC) and Texas Instruments Inc. (NASDAQ: TXN) look poised to create better shareholder value than most others.

The market has gone through a major transformation since Intel established its foothold in the industry a few decades ago, but the tech giant continues to be the largest supplier of microprocessors by revenue. Though it faces competition from relatively new players like Advanced Micro Devices Inc. (NASDAQ: AMD), the company continues to maintain its dominance in personal computers.

Realizing the need to protect market share, after losing sales to competitors, Intel is exploring new opportunities and clinched a deal with Microsoft Corp. (NASDAQ: MSFT) recently to develop a feature-rich microprocessor system for Windows 11, which is expected to be launched soon. More partnerships and other growth initiatives are in the pipeline, especially in high-performance computing where the company enjoys a lead. In short, it looks like Intel has jumped on the innovation bandwagon and is finally shedding the laggard image.

Intel’s stock bounced back quickly from last year’s tech selloff and reached the pre-crisis levels a few months ago, but pared a part of the gains since then. All along, it stayed above the 52-week average and mostly outperformed the market. Intel might disappoint short-term investors because it would take a while before the ongoing growth initiatives start bearing fruit. Though its second-quarter earnings and revenues might not have matched last year’s blockbuster performance the numbers should come in above Wall Street’s expectations – the announcement is due on July 22. 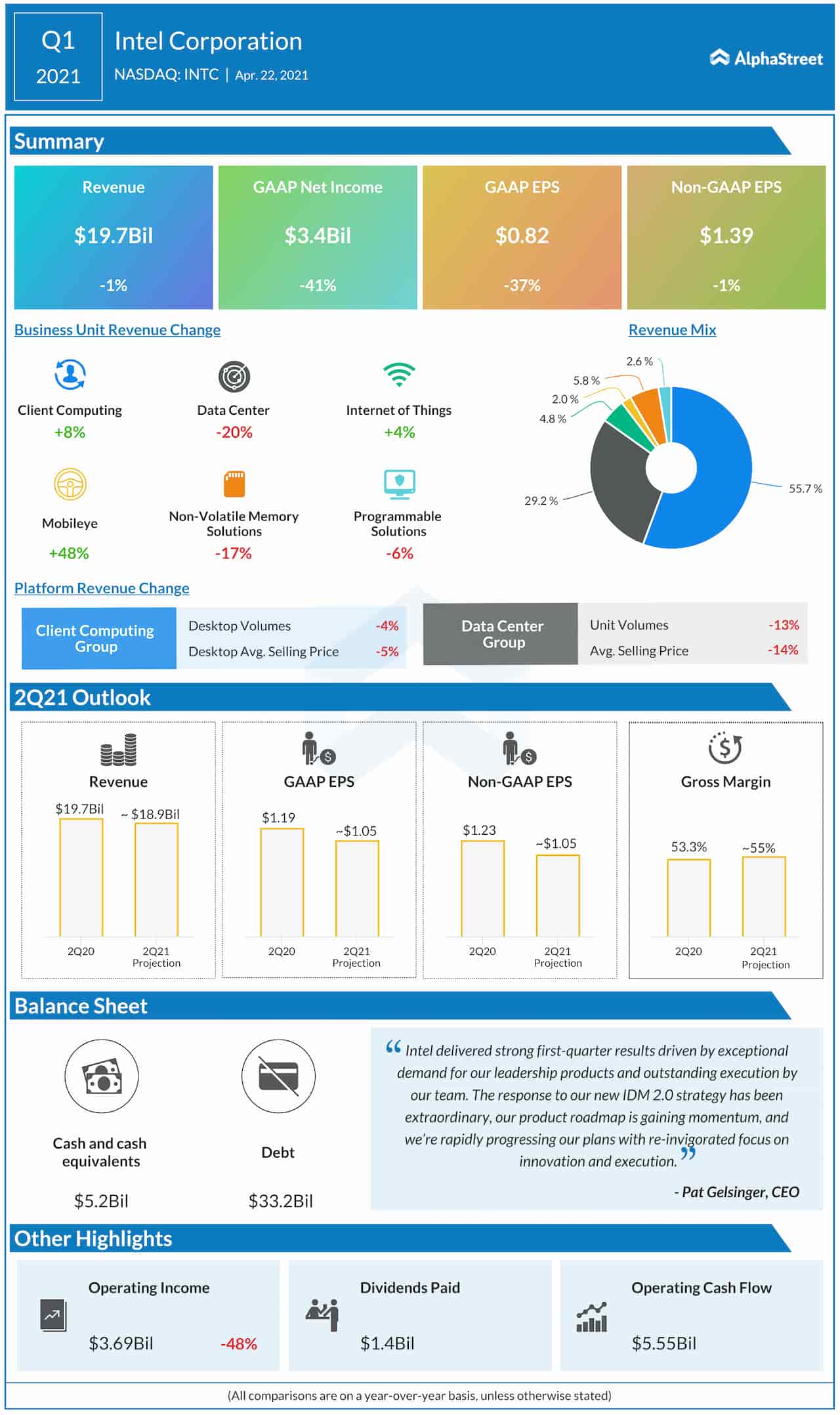 For the first quarter, Intel reported a profit of $1.39 per share on revenues of around $20 billion, which was broadly unchanged from the year-ago period but above the market’s projection. At $55.85, the company’s stock traded slightly lower during Thursday’s session.

Texas Instruments, a pioneer in analog chips, has dominated that segment of the semiconductor market over the years. While its focus on analog and embedded chips designed for the electronics and automotive markets differentiates Texas from Intel, the stock is as attractive as that of the latter. The company has a history of effectively navigating through major challenges — be it the recession or the US-China trade standoff – and it was no different during the pandemic.

Texas’ performance in the stock market has been better than that of the broad sector, a trend market watchers believe would continue in the foreseeable future. Its products enjoy stable demand – analog chips act as a bridge to their digital counterparts and their relevance is constantly increasing, though the market for digital chips is much bigger.

The main risk to the business is the relatively slow growth for the analog chip market and cyclical factors associated with the sector.  But the changing market dynamics indicate that the analog segment is set to expand at a faster pace in the coming years, almost matching the semiconductor industry as a whole.

Unlike some of its peers, the company is better positioned to manage the supply chain and operate in a cost-effective manner, thanks to its fabrication and testing facilities spread across markets. Also, the diverse product portfolio and scale of production help Texas stay resilient to market crises.

Going by its past performance with regard to value creation – extensive use of capital for repurchasing stock and enhancing dividend program – the tech firm’s shareholders should be a happy lot. The stock has grown 16% in the past six months and is currently trading close to the April peak. Since the uptrend is likely to continue in the coming weeks, TXN has the potential to add value to investors’ portfolios.

Maintaining their bullish view, analysts estimate that the company’s earnings grew 23% year-over-year in the second quarter, aided by a 34% growth in revenues – the report is due next week. In the first three months of FY21, earnings had grown by 51% to $1.87 per share and topped expectations. It was driven by a similar increase in revenues to $4.3 billion, which also beat the estimates.

When the chip shortage escalated last year, something that caught everyone’s attention was the wide range of industries that got affected. Since semiconductor technology is making inroads into every business sector, enhancing the performance of products, a bright future awaits the companies. It also offers a unique opportunity to investors, especially those looking for long-term engagement.