The ever-growing demand for efficient wireless networks got bigger after the pandemic set off the remote work and study-from-home revolution, which made telecom firms like Verizon Communications Inc. (NYSE: VZ) fast-track their growth plans. In s sign that its aggressive 5G push is paying off, Verizon entered 2021 on a high note and reported stronger-than-expected results for the first quarter.

Verizon’s stock mostly traded sideways in the recent past as the COVID-induced slowdown evoked mixed sentiment among investors. But things are improving and experts, in general, have a positive view about the stock. While Verizon has been a favorite of dividend investors, new-generation investors will be weighing the growth prospects also. The consensus price target on the stock, which looks fairly valued, represents a 7.5% upside.

The New York-based wireless service provider is counting on its network-as-a-service strategy and 5G expansion to meet long-term growth targets. Currently armed with C-band spectrum, which the company acquired in a $53-billion government auction, it is extending 5G coverage to more areas. The stable cash flow, which grew in double digits last year, should help the company meet its capital needs comfortably. 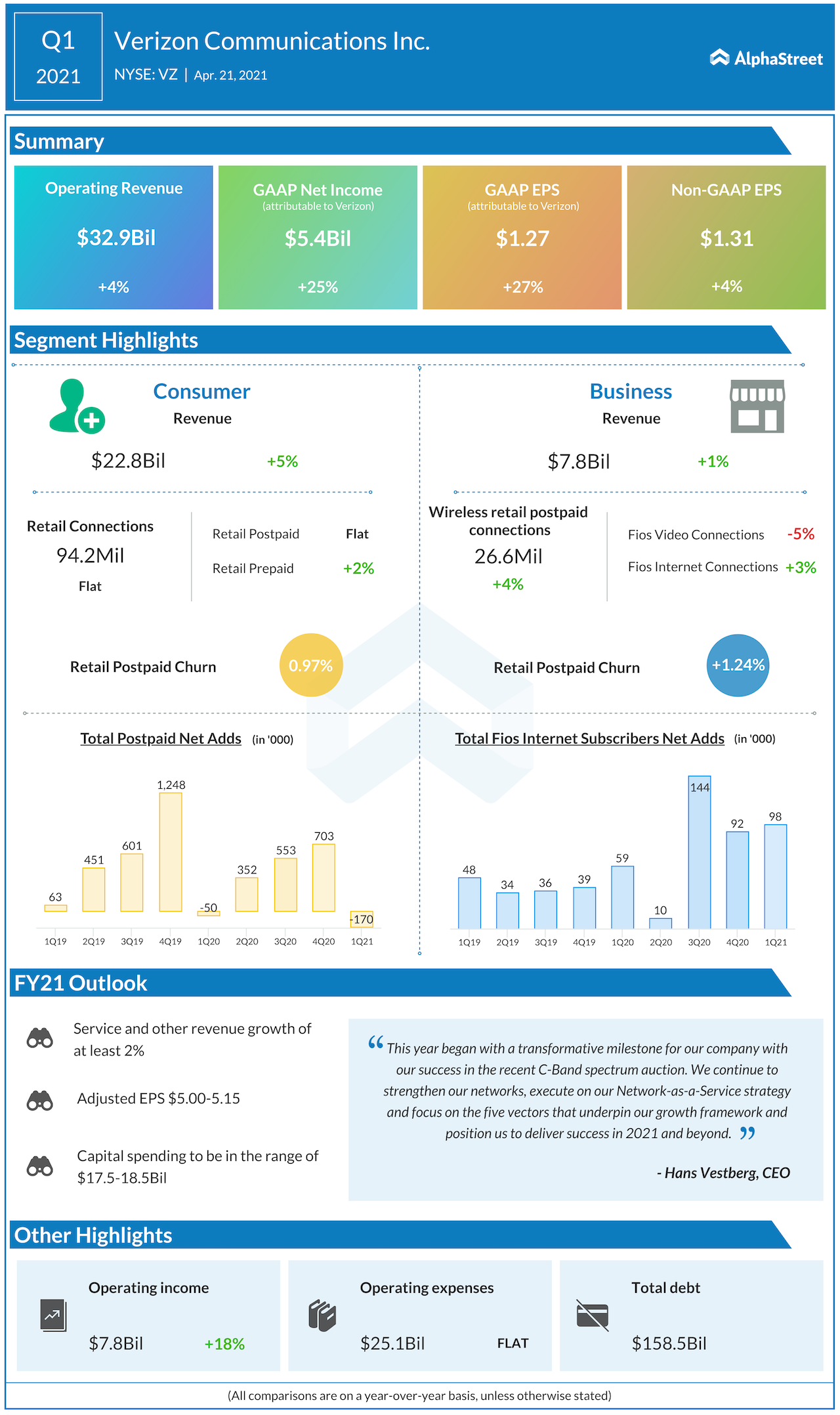 “Our intent is to invest $10 billion of incremental C-Band CAPEX to accelerate the integration of this capacity into our network. We’ve recently signed deals with Crown Castle and SBA to accelerate our C-Band deployment and look forward to providing further updates on the build status throughout the year. We have already ordered half of the total network equipment needed from our 5G suppliers to support C-Band deployments in 2021. And the satellite operators are on track to clear the spectrum between the third and fourth quarter of 2021 for the first tranche of the spectrum.”

The company’s first-quarter results benefited from the impressive performance of its wireless segment — operating revenues grew 4% from last year to $32.9 billion. As a result, adjusted earnings moved up to $1.31 per share from last year’s $1.26 per share. Earlier, Verizon had forged a partnership with Apple Inc. (NASDAQ: APPL) and expanded its collaboration with The Walt Disney Company (NYSE: DIS).

However, it would not be easy for the company to achieve its goals in a market where competition is intensifying. The slowdown in subscriber addition in recent quarters underscores the need for effective strategies to attract customers, mainly to the postpaid phone segment. Also, heavy spending on network infrastructure will force the management to withhold its share buyback program for the time being.

Among others, AT&T (NYSE: T) recorded strong subscriber growth across all business segments in the first quarter. Its revenues rose to $44 billion, mainly driven by mobility services. The numbers also topped expectations, as they did in the previous quarter.

Despite the positive March-quarter results, Verizon’s stock slipped Wednesday evening and traded close to the levels seen twelve months ago. The shares traded lower early Thursday, reflecting the muted sentiment. They have declined 2% since the beginning of the year, all along underperforming the S&P 500 index.