Shares of the fashion specialty retailer Nordstrom (JWN) slipped on Tuesday after the company rolled out sales projection for 2018 that fell below the consensus estimate. During the investor day held on July 10, Nordstrom reaffirmed its prior outlook for 2018. The retailer expects sales to fall between $15.2 billion and $15.4 billion. This is much lower than the consensus estimate of $15.8 billion. The company projects its comparable sales to grow between 0.5% and 1.5% and EPS is expected to be in the range of $3.35-3.55. The consensus estimate sees EPS of $3.47.

The Seattle-based retailer even announced its sales projection for the long term. In the next five years — 2017 to 2022 — the company expects sales to grow between 3% and 4% and growth in earnings before interest and taxes (EBIT) is expected to be 5-6%.

Nordstrom, that attempted to go private early in the year, has a much smaller footprint when compared to other retailers. Still, it will have to face the same pressure as other retailers like Macy’s (M), Target (TGT) and J.C. Penney (JCP) in a challenging retail environment.

Nordstrom is trying to get ahead in the race by investing in digital technology. The department stores chain recently acquired two retail technology companies; BevyUp and MessageYes. The retailer is also expanding its brand partnership by entering into new deals and by opening its first full-line flagship in New York City. This year, the company’s off-price division opened its first rack store in Canada.

To fix the customer’s shift to online shopping, Nordstrom on Monday said, it plans to focus on a different and new concept like onsite tailoring. The Seattle, Washington-based company said it is expanding small-store model where it plans to combine several initiatives. These stores will not have clothes for sale rather it will attract customers with merchandise that they can try. Shoppers can reach out to style experts to get a customized look for their clothes. Shoppers can order merchandise online to be delivered the same day.

On Tuesday, the company’s shares traded down at 2.67% to $52.09 and continued to trade in the negative territory before the bell today. 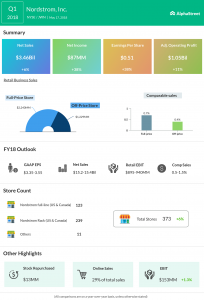