Novavax Q1 earnings preview: Future plans on ResVax and NanoFlu will be the key focus points

Novavax Inc (NASDAQ: NVAX) is slated to report its first quarter 2019 earnings results after market closes on Thursday. Novavax stock, which plunged to a 52-week low ($0.49) last week, was down about 3% during midday today from yesterday’s closing price of $0.53. On average, analysts expect the biotech company to post a loss of 11 cents per share on revenue of $3.94 million.

After reporting that its respiratory disorder vaccine ResVax failed to meet the primary end-point in the late-stage clinical study on February 28, 2019, Novavax stock plummeted 67% and the downward momentum continued until the company reported Q4 results on March 18. 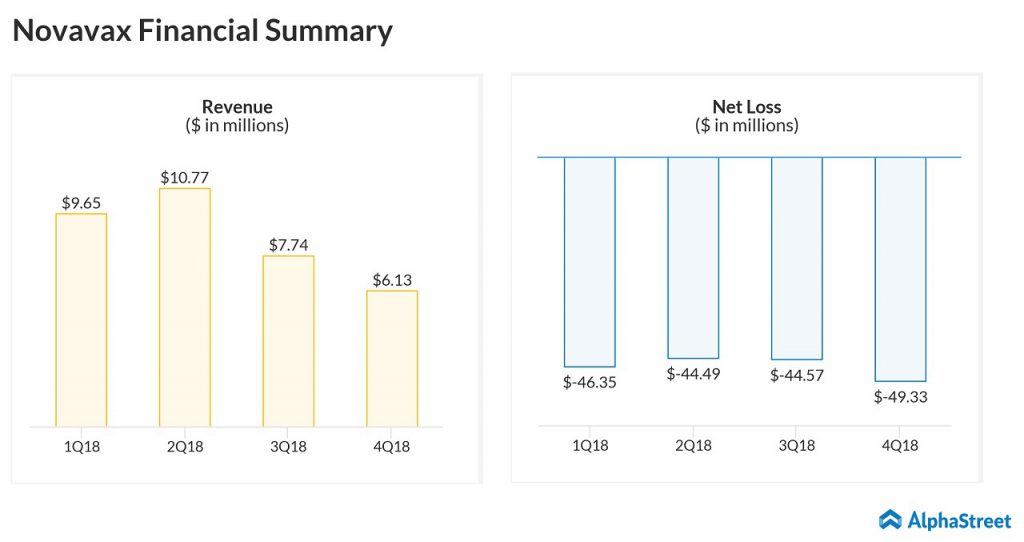 The Gaithersburg, Maryland-based firm’s shares recovered and traded upwards after it reported a loss of 13 per share on revenue of $6.1 million. However, the stock lost its momentum and slipped to yearly low last week.

Novavax also said that it will work towards reaching an agreement with the FDA during the second quarter of 2019 on a proposed Phase 3 study design for its influenza vaccine NanoFlu utilizing accelerated approval criteria.

On April 11, 2019, Novavax received a warning notice from Nasdaq saying that the stock could be delisted as the company’s stock fell below $1 for 30 consecutive days. The stock has to close at $1.00 or higher for a minimum of ten consecutive business days during 180-day compliance period to avoid delisting and if this doesn’t happen by October 8, 2019, Nasdaq will be sending delisting notice to Novavax.

To avoid the delisting, Novavax has scheduled a special stockholders meeting on May 8 to consider a proposal to effect a reverse split of the company’s outstanding shares of common stock at a ratio of 1-for-20.

Novavax stock had lost 8% of its value in the last one month and slumped 72% since the beginning of 2019.