Just about a month after Apple (AAPL) created history by lifting its market cap to $1 trillion, e-commerce giant Amazon (AMZN) achieved the coveted milestone Tuesday, after nearly doubling its value over the past twelve months.

Amazon’s market cap crossed the $1-trillion mark after its stock hit a record high during intraday trading Tuesday. The stock is currently hovering near the $2050-mark, barely a week after crossing $2,000.

The most striking similarity between Apple and Amazon is their ability to create shareholder value. The current net worth of Jeff Bezos, Amazon’s chief executive officer, and the brain behind the company’s unique business model is estimated to be $166 billion, which makes him the richest man in the world.

Unlike Apple, whose core business is centered around consumer hardware and sale of electronic gadgets, Amazon runs a more diversified business that generates nearly $180 billion in annual revenues and employs more than half a million people.

Amazon’s journey to the top has been eventful, marked by progressive transformation from an online bookstore in the early 90s to a publisher; then to e-commerce marketplace and more recently to a cloud service provider. While e-commerce continues to be the company’s growth engine, investors are also lured by the success of other segments like Amazon Web Service.

In a short span of time Amazon established itself as the largest e-commerce service provider in America, giving both its peers in the online space and traditional retailers a run for their money. The widespread adoption of online shopping in recent years and the growing popularity of smartphones came as a boon for Amazon.

Analysts remain bullish about Amazon’s near-term growth prospects. Going by the prediction of Morgan Stanley, Amazon shares are on their way to reach $2,500 soon, after gaining about 72% this year alone. Continuing the persistent uptrend that began several months ago, the stock reached an all-time high Tuesday and traded higher throughout the session. 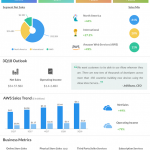