Nutanix stock plunged more than 20% due to disappointing Q3 outlook

Shares of the Nutanix (NASDAQ: NTNX) dwindled about 26% in the extended hours of trading as the Q3 outlook failed to beat estimates. However, for the second quarter, the company reported better-than-expected results.

For the third quarter, Nutanix expects revenue to be between $290 million and $300 million. This is about $49 million lower than what analysts were forecasting resulting in the stock getting beaten up post the earnings release.

Adjusted net loss per share is forecasted to be $0.60, calculated based on approximately 183 million weighted shares outstanding. On the flip side, the street consensus was $0.28 loss per share for the third quarter.

The huge deviation in the Q3 guidance was attributed to the lower marketing spending and sluggish hiring on the sales front. However, the hybrid cloud provider is currently fixing these issues. Investors would be interested to see how this would come out in the upcoming quarter. 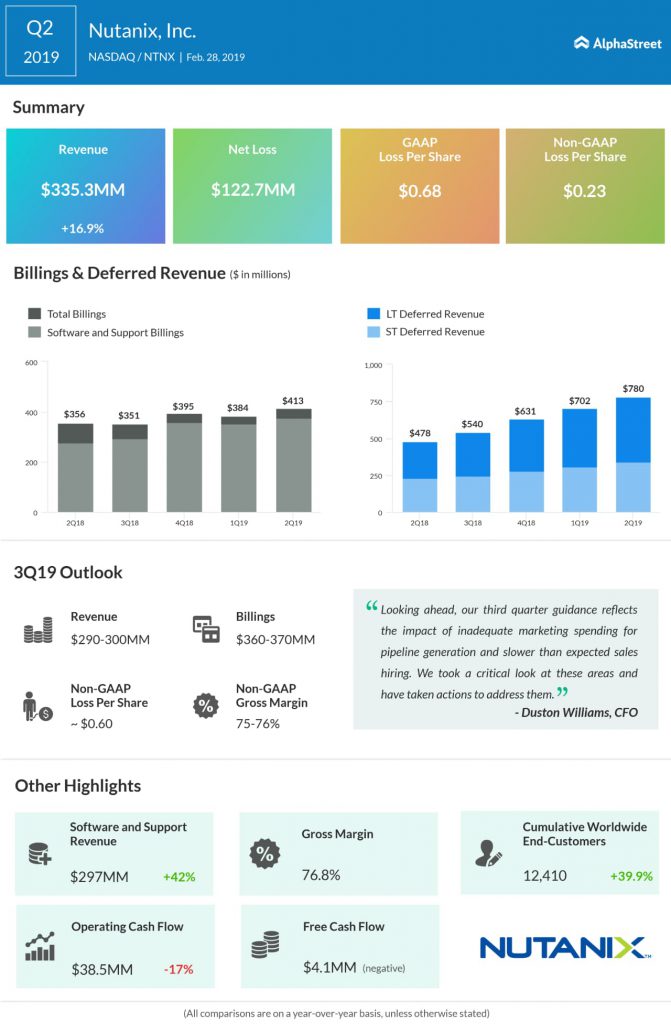 For the third quarter, billings are predicted to be in the range of $360 million to $370 million. This is much lower than the $413.4 million reported in the second quarter, up 16% over last year.

Last quarter, revenue jumped 13.7% to $313.3 million and net loss widened to $94.3 million or $0.54 per share. Adjusted net loss narrowed to $0.13 per share from $0.16 per share a year ago. The bottom line came in narrower than analysts’ expectations while the top line surpassed estimates.

Software and support revenue came in at $297 million, up 42% over last year while software and support billings increased 37% over the prior year period. Subscription revenues surged 112% and 57% of billings came from subscriptions. This is a good indication that the shift to recurring business model seems to be working for the firm.

Nutanix is revamping its business model from the legacy hardware-linked sales towards software-only deals and subscription-based model. The ongoing transition is expected to augur well to the company’s top and bottom line in the near future. In addition, it has been able to add new customers and the ability to upsell and cross-sell its offerings to existing clients is going to bode well to improve its margins.

Operating expenses shot up 53% to $365.5 million, primarily due to an increase in stock-based compensation and amortization of a few intangible assets. For the Q3 period, adjusted operating expenses are forecasted to be in the range of $330 million to $340 million.

Deferred revenue, one of the key metrics watched by the street, improved 63% over last year to $779.9 million and sequentially saw an 11% improvement as the company was able to add more clients to its roster.

Nutanix ended the quarter with 12,410 customers, an increase of 3,540 clients over last year. The company added 920 new customers in Q2 which include the likes of Harris Corporation, IHG, Apache Corporation, and GS Energy Corporation. With the increased adoption of hybrid-cloud based offerings from clients and the ongoing transition towards subscription-based model is expected to add more clients and improve market share in the enterprise cloud space.

The stock price of Nutanix has increased above 20% this year and has surged 37.4% in the last 12 months.