The online ticketing solutions provider Eventbrite (NYSE: EB) had an excellent debut day, rising 58.70% from its IPO price of $23 per share. Eventbrite, which raised $230 million by selling 10 million Class A shares, skyrocketed to $39.30 at midday and closed the day at $36.50.

On August 23, Eventbrite filed for IPO with the Securities and Exchange Commission without mentioning the offer price and the number of shares it planned to sell. Later, the ticketing company fixed the IPO price range as $19 to $21 per share and then on Thursday hiked the offer price to a range of $21 to $23 per share. 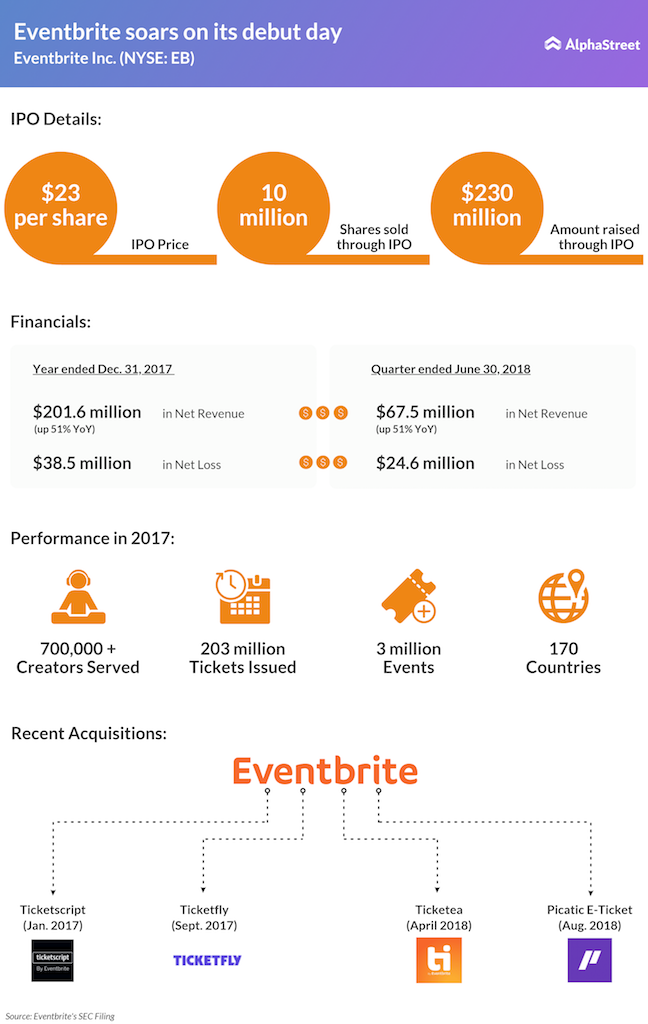 The San Francisco-based entertainment platform, which launched its operations as part of Mollyguard Corporation in 2006, changed its name to Eventbrite in 2009. The company’s net revenue surged 51% to $201.6 million and registered a net loss of $38.5 million in 2017. For the quarter ended June 30, 2018, net revenue stood at $67.5 million and net loss was $24.6 million. In the past eight quarters, Eventbrite reported profit only in the first quarter ended March 31, 2018.

Eventbrite generates revenue by charging event creators on a per-ticket basis when a person buys a ticket for an event. In 2017, the company got its 54% of net revenue from these creators.  In 2018, the platform is expected to address a current market opportunity in its top 12 markets generating $3.2 billion in gross ticket fees with an estimated 1.1 billion paid tickets. Also, the company believes to expand across new categories and augment its presence in various geographies.

However, the company’s failure to report a profit in the recent quarters, threats it faces from the competitors like Live Nation Entertainment (LYV) subsidiaries Front Gate Tickets, TicketWeb, and Universe, and the low-paid or free tickets remain a concern for the investors.

The company said in the filing that large e-commerce companies such as Amazon (AMZN) and eBay EBAY) have in the past, or currently, operate within the ticketing space. Eventbrite also cautioned that Facebook (FB), Google and Twitter (TWTR) have large user-bases and they might add a product in the event-related activity space.

The private company, which was co-founded by the current CEO Julia Hertz, her husband Kevin Hartz (the chairman of the board), and CTO Renaud visage, had raised a total of $332 million in funding from nine rounds from 2006. Tiger Global owns 21.4%, while Sequoia Capital owns 20.5% of the company’s Class B shares.