The internet radio services firm Pandora (P) has been around for a long but struggled to survive in an extremely competitive environment. To win the streaming music wars, Pandora is going the way of the top two contenders Spotify (SPOT) and Apple Music by launching a new family plan.

Pandora, which has been gradually transitioning to an on-demand streaming service, is rolling out a new premium unlimited family plan that can be availed at just $15 a month, with an aim boost its user retention. This new unlimited no commercial plan allows nearly six members to have access to all the premium services simultaneously. 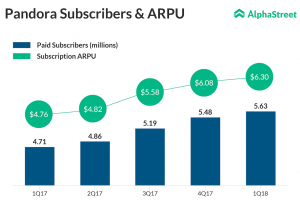 Pandora is going the way of the top two contenders Spotify (SPOT) and Apple Music by launching a new family plan.

Pandora began offering the premium services last March after acquiring Rdio. During the recent first quarter, the number of paid subscribers for Pandora Premium and Pandora Plus reached 5.63 million, growing 19%  year-over-year. With this latest deal, looks like Pandora is rigorously working towards getting more paid subscribers from its monthly free listeners. Pandora, that is available only in the US, is trying to keep pace with Spotify that boasts of having close to 75 million paid subscribers.

Pandora has not only opted to replicate the family plan, but also introduced a new Spotify-like feature named ‘Personal Soundtracks’. The personalized playlist is built based on the listening trend.

Family plans have been of a great help to Spotify. Such plans helped generate a significant amount of growth and also helped in user retention. But the amount of revenue Spotify got from each premium subscriber dropped. Pandora, on the other hand, has witnessed a steady growth in its ARPU (Average revenue per user). The streaming service might just get it right to get back into the game this time around.