PayPal (PYPL) which has been on an acquisition hunt in the last two months reported its second-quarter results after the closing bell. Thanks to improved payment volumes, revenue increased 23% over last year while profits jumped 28% to $0.58 per share, both beating analyst estimates. The company raised its full-year outlook which hasn’t impressed investors with the stock price decreasing nearly 4% in the extended hours of trading.

Board approved a new $10 billion stock buyback program, which will resume after the current $5 billion program is completed. 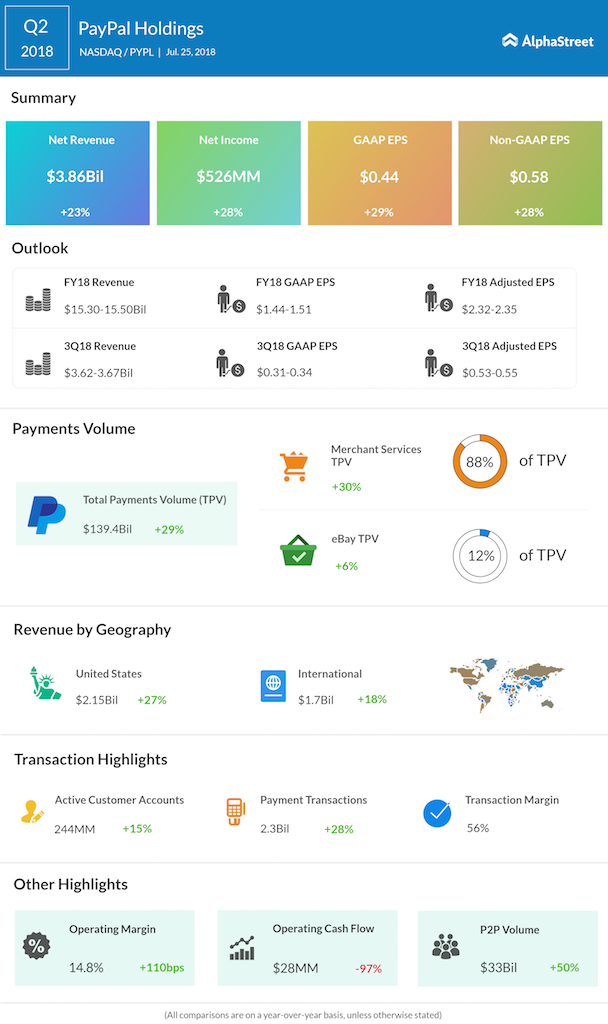 Total payments volume (TPV), a key metric tracked by analysts, shot up 29% to $139 billion. PayPal added 7.7 million active accounts with 18% jump in net new accounts. However, this is less compared to 8.1 million accounts added in the last quarter.

Payment transactions done on the platform improved 28% compared to last year. The company processed 35.7 transactions per active account on a TTM basis, improving 9% due to improved engagement from its users.

Venmo continues its impressive performance with volumes jumping 50% to $33 billion. PayPal’s monetization efforts seem to be paying off with the social payments platform processing more than $46 billion over the last 12 months. In the second quarter, the platform processed $14 billion, up 78% over last year.

In order to augment its digital offerings and compete with its rivals, PayPal has been on a buying spree; it has acquired four companies in the last two months spending more than $2.7 billion. In May, it gobbled up European based iZettle for $2.2 billion, which is the biggest deal done by the firm till date. The shopping list also includes Hyperwallet, which was acquired in June for $400 million, and two other firms Jetlore and Simility.

Recently CEO Dan Schulman stated that company would be spending $3 billion annually for M&A. It would be interesting to see in the impending quarters how these deals are going to boost the bottom line. PayPal’s stock has been on a roll increasing by about 57% in the last 12 months and above 24% in 2018.

Third quarter revenue outlook failed to impress the street, as it fell short of their forecasts. Based on current spot prices, the company expects to record 12% to 13% growth in sales with non-GAAP earnings to come in between $0.53 and $0.55 per share for the current quarter.