PepsiCo’s (PEP) Indra Nooyi stepped down as the company’s CEO on Monday and the Board of Directors elected Ramon Laguarta as her replacement, effective October 3. Nooyi will continue as the Chairman of the Board until early 2019.

“Leading PepsiCo has truly been the honor of my lifetime, and I’m incredibly proud of all we have done over the past 12 years to advance the interests not only of shareholders, but all our stakeholders in the communities we serve,” said the outgoing CEO Nooyi. She also added, “Growing up in India, I never imagined I’d have the opportunity to lead such an extraordinary company.”

Nooyi joined the company in 1994 and was named CFO in 2001. She was appointed as CEO and Chairman in 2006. From the time of Nooyi’s appointment as CEO, the beverage and snacks giant’s stock price more than tripled and its revenue had grown from $35 billion to $63.5 billion at the end of 2017. Pepsi’s first female chief executive has been ranked as “The World’s 100 Most Powerful Women” by Forbes magazine continuously for ten years starting from 2008.

Laguarta, in his 22-year career at Pepsi, has served in many executive and general management roles. Currently, he serves as President of PepsiCo, the post which he held from September 2017 and was taking care of worldwide operations, corporate strategy, public policy and government affairs. Laguarta will also join the board as one of the directors from October 3.

Pepsi announced that there will be no other changes in the senior management positions. Shares of Pepsi were trading up about 1% during the pre-market trading hours. 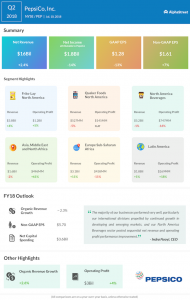