PepsiCo Inc. (PEP) beat market estimates on revenue and earnings for the third quarter of 2018. Despite the positive results, the stock is down slightly in premarket trade.

The food and beverages giant reported total revenues of $16.4 billion, up 1.5% from the same period last year. Organic revenue grew 4.9%. 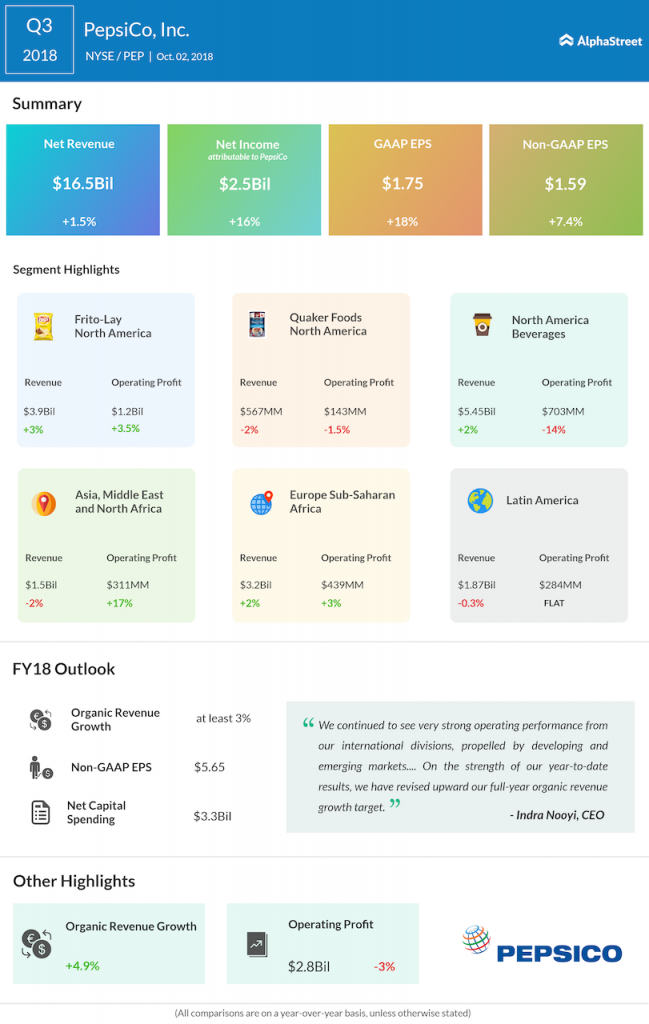 PepsiCo updated its guidance for the full year of 2018. The company now expects organic revenue growth to be at least 3%. Core EPS is expected to be $5.65, up 8% versus last year. Core constant currency EPS growth is touted to be 9%.

As customer preferences shift to healthier options, PepsiCo has been revamping its product line to cater to this trend. As part of these efforts, the company has made significant acquisitions such as Bare Foods and SodaStream. PepsiCo has also rolled out products like Bubly and KeVita which are doing well.

PepsiCo is also working to improve its online business as the prominence of e-commerce grows. Like its rival Coca-Cola, which acquired coffee chain Costa recently, Pepsi is diversifying into different products in order to maintain its solid footing and not rely too much on its signature cola brand.

Last month, PepsiCo chief Indra Nooyi announced her decision to step down as Chief Executive Officer after a tenure of 24 years with the company. Ramon Laguarta was appointed as her successor. This earnings call will be Ms. Nooyi’s last one as CEO with PepsiCo.