Philip Morris’ (PM) smoke-free push is paying off. Is the stock a buy?

Encouraged by the positive first-quarter outcome, the management raised its full-year 2021 earnings outlook

Tobacco stocks slid this week after the government considered a proposal to pass legislation for regulating the contents of tobacco products. Philip Morris International (NYSE: PM), which is transitioning from conventional cigarettes to smoke-free products, bounced back from the initial dip quickly after its positive first-quarter results triggered a stock rally.

The New York-based tobacco giant managed to navigate through the pandemic effectively so far, reporting stronger-than-expected earnings consistently since the virus outbreak. The resilience can be partly attributed to the growing demand for the company’s heated tobacco device IQOS, which is viewed as a healthier alternative to regular cigarettes that is rapidly losing popularity. In the current scenario, it is very likely that tobacco companies would further expand their smokeless product portfolios.

For the second half, assuming that many of our key markets will have largely emerged from COVID restriction, we expect continued robust topline growth. This includes the contribution of higher expected device shipments, which will result in less gross margin expansion, compared to the first half. New product launches, investments in distribution, and the phasing of productivities will also play a role. We will also step up our commercial investment in the future growth of RRP through portfolio and geographic expansion, including product launches such as IQOS ILUMA. 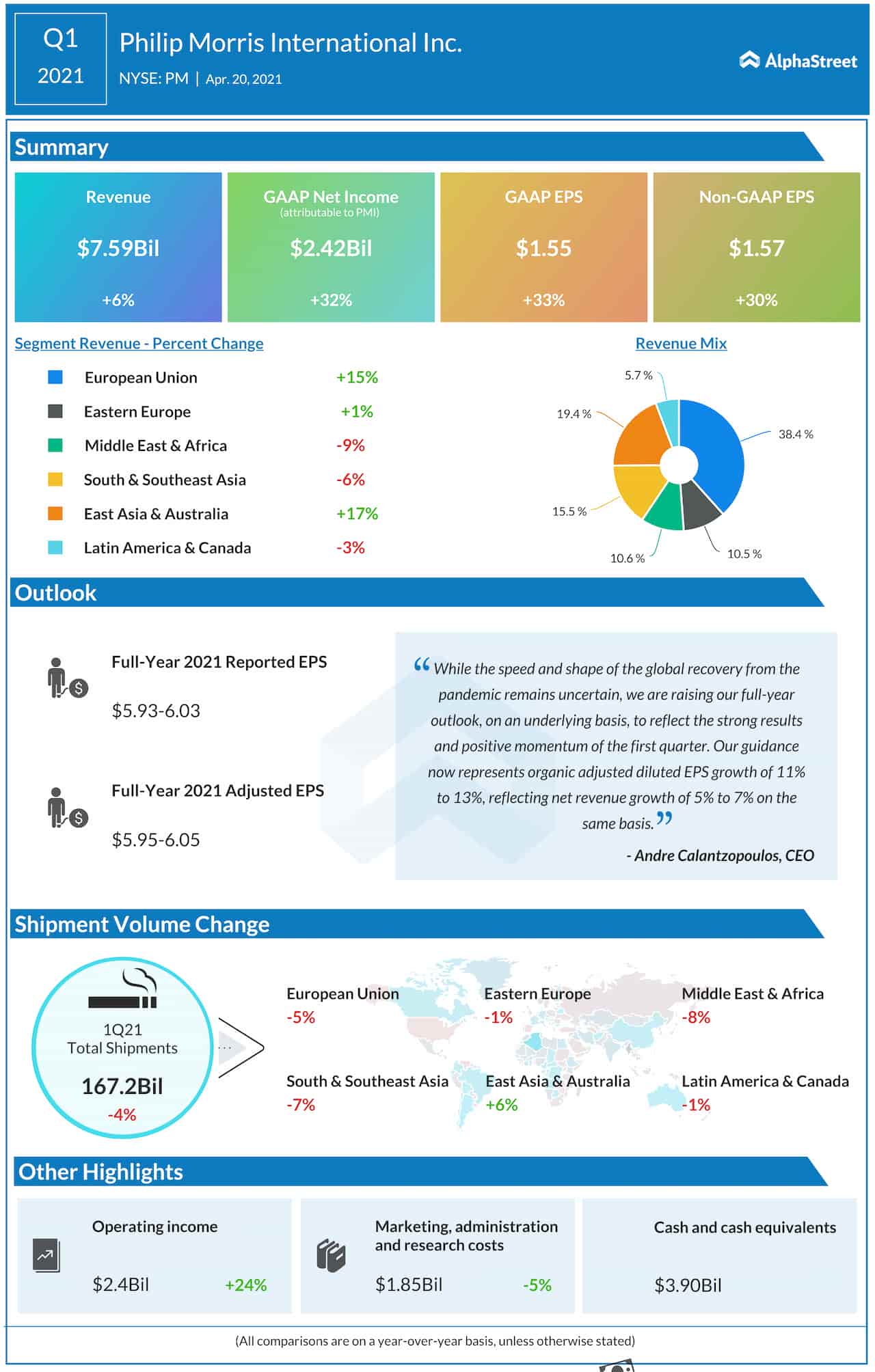 The new trend in tobacco consumption is expected to gain more traction in the coming years, providing a fillip to Philip Morris in terms of product sales. Meanwhile, prospective investors can take a cue from the positive sentiment surrounding the company’s stock and grab the opportunity, for PM looks poised to create handsome returns during the remainder of the year. Experts overwhelmingly recommend buying the stock.

A recent proposal by the Biden administration to reduce nicotine content in cigarettes to non-addictive levels and to ban menthol could be a concern for manufacturers if the government goes ahead with the plan. While the move is unlikely to have any immediate effect, the market will be closely watching how the investor community would react to the debate.

Impressive revenue performance in key markets, including Europe and East Asia, more than offset weakness in the other regions in the first quarter of 2021. Consequently, the company’s topline gained 6% annually to $7.6 billion, surpassing the market’s projection. Earnings grew sharply to a record high of $1.57 per share and topped expectations. IQOS accounted for about 28% of total revenues. Buoyed by the positive outcome, the management raised its full-year 2021 earnings outlook.

The company’s shares maintained a steady uptrend during the pandemic, unlike the majority of Wall Street firms that experienced weakness early last year. The stock, which is hovering near the $100-mark currently, closed Wednesday’s session slightly higher.