PNC Financial (PNC) will kick-start this quarter’s bank earnings tomorrow at 6:45 AM ET and we are all ears with its top- and bottom-lines predicted to see year-over-year growth. We had earlier reported that banks are entering this earnings season with numerous tailwinds in the form of corporate tax cut, higher employment rate, robust trading activity and a hike in interest rates. And PNC is one of better stocks that are likely to outperform in the first quarter.

In the previous four quarters, the financial services company has surprised the street by reporting higher earnings, which helped the stock outperform the one-year industry average gain of 21.8%, by reporting over 32% growth. This quarter, the company is expected to report a mid-single digit growth in revenue to about $4.16 billion, while earnings are estimated to be around $2.43 per share, driven by lower effective tax rates. 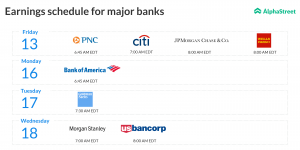 Net interest income for the quarter is predicted to grow high-single-digit to $2.34 billion as the Fed rate hikes expand the interest rate margin.

This quarter, the company is expected to report a mid-single digit growth in revenue to about $4.16 billion, while earnings are estimated to be around $2.43 per share, driven by lower effective tax rates.

PNC’s strong point, its loan balance growth, has been the primary driving factor behind its solid performances in the trailing quarters. In the fourth quarter, the Pittsburg-based company posted 5% improvement in loan balances, commercial and consumer combined. The company anticipates another mid-single-digit increase in 2018 and we have no reason to doubt this figure, given the positive environment.

With PNC stock having an impressive growth of 30% in the past one year, we are not sure if the stock is set for another earnings beat. But positive fundamentals and a favorable market environment make the stock one of the better picks.