Qualcomm shares rose around 2% in the aftermarket after it reported better-than-expected earnings results in the second quarter of 2018. Revenue for the quarter witnessed a modest growth of 5% to $5.3 billion.

Meanwhile, earnings took a hit during the quarter due to its legal tussle with Apple (AAPL) over the alleged unfair licensing practice. GAAP EPS fell 52% to $0.24 per share, while on an adjusted basis, earnings came in at $0.80 per share, down 40% year-over-basis.

The company did not record QTL revenues during the quarter, for royalties due on the sale of Apple’s or the other licensee’s products. 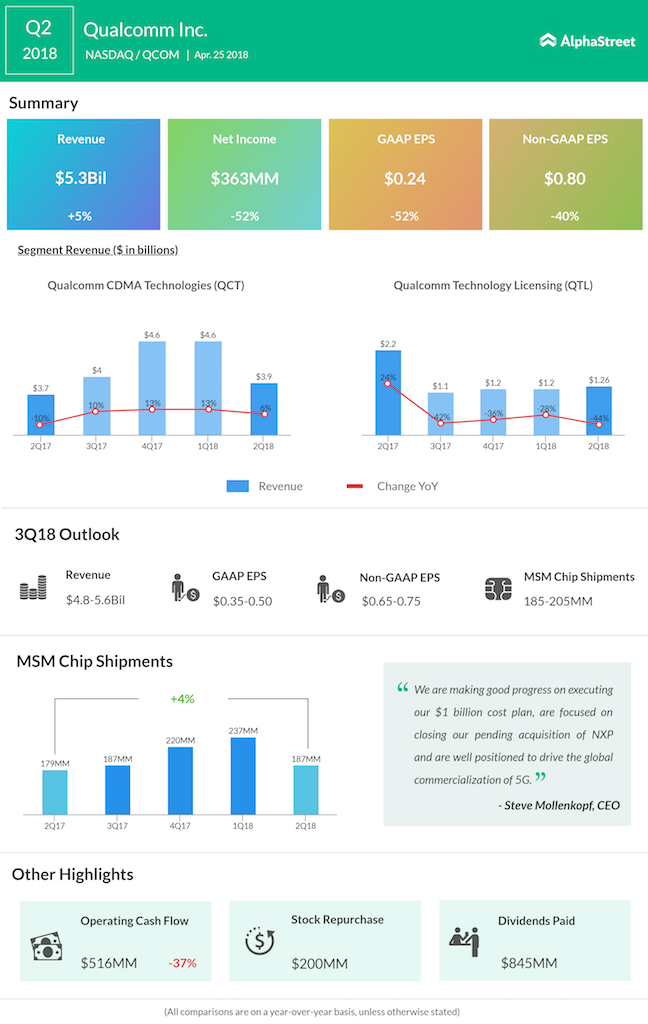 Qualcomm, which escaped a hostile takeover bid by Broadcom (AVGO), has been going through a rough phase for the past few years. Apart from its ongoing battle with Apple, Qualcomm was crushed by the trade war between China and the US.

Qualcomm may have a lot to lose in the brewing trade war as it is banned from selling its semiconductors to ZTE Corp. — a Chinese telecom equipment maker. This ban will have a severe impact the company’s revenue.

Due to these political struggles, the company’s deal with NXP Semiconductors (NXPI) is getting delayed. Qualcomm is said to refile an application with the Chinese regulators seeking clearance for its proposed $44 billion takeover of NXP Semiconductors. The two companies earlier pushed the closure date to July of this year.

Meanwhile, Qualcomm is ramping up its operations to boost its earnings. It rolled out a $1 billion cost-cutting plan early this year and is considering layoffs to boost long-term growth.