Retail Bankruptcy: Is it going to be Sears today and JCPenney tomorrow?

With a healthy economy, restructuring attempts, and new technologies, few retail companies have managed to survive in the new online purchase era. Those who failed to match pace have gradually been out of the business. In 2017 itself, there were nearly 21 companies that had filed for bankruptcy protection and this included the iconic retailer Toys R Us.

Bankruptcies in the retail sector remained at an all-time high during the first quarter of 2018, according to the latest report from the investor research firm Moody’s. Just a few months into the start of this year, we have had almost 11 retailers who have either filed for bankruptcy or have announced their liquidation plans. This list includes Claire’s Stores and The Bon Ton Stores and retail bankruptcies are expected to increase further in this year.

Here are the two prominent retailers that are facing many problems and struggling to survive — Sears Holding (SHLD), the parent company of Sears and Kmart, and JCPenney (JCP). Among the two, Sears is teetering on the edge of bankruptcy.

For nearly a decade, Sears Holding has been witnessing a steep decline in its overall sales. Till date, the company has managed to avoid bankruptcy by borrowing a huge loan from its CEO Eddie Lampert, close to $1.6 billion. In an attempt to turnaround things, the company has been selling assets, shutting down stores, showing the door to employees and cutting costs. But unfortunately, all these efforts have done little to improve the business, making it destined to go bankrupt. 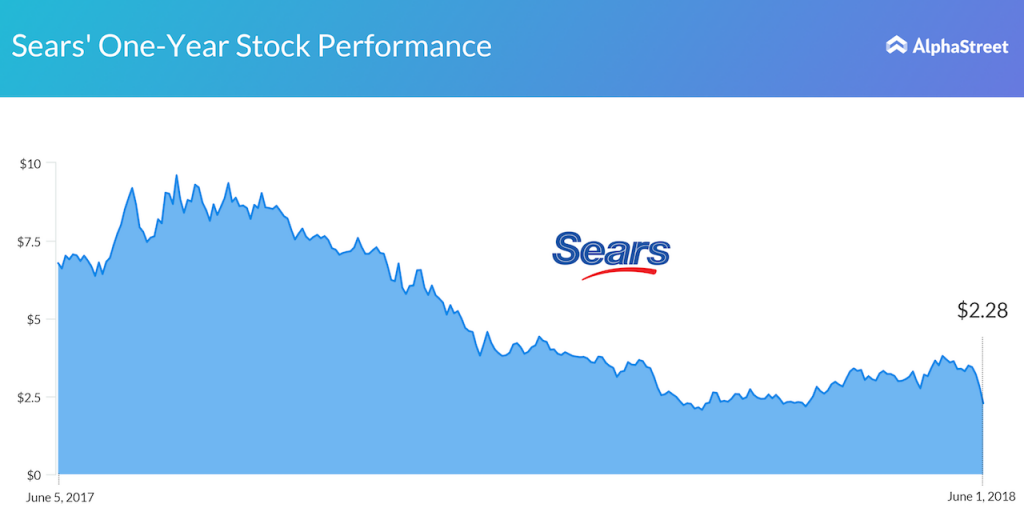 Sears, called the Amazon of its time, is now seen scattered in a handful of locations in the US, as more than half of its stores have been closed down since 2012. In 2017, it closed 358 stores. Sales have been down 45% since 2013 and the total debt has mounted to over $4 billion. The company’s stock is down about 95% from its 2007 peak. It’s discount chain Kmart, is at the highest risk of being shut down completely, due to the intense competition from retail giants Walmart (WMT) and Amazon (AMZN). Sears has already closed most of the Kmart stores. The company is even looking to sell few of its brands including Kenmore.

Bankruptcies in the retail sector remained at an all-time high during the first quarter of 2018, according to the latest report from the investor research firm Moody’s.

Most of the industry watchers blame the CEO’s strategies and his management for the company’s downfall rather than the shift in consumer trends. Also, Sears failed to upgrade its stores and had not attempted in investing to improve its operations. Considering all this, it is difficult for the department-store chain to survive. Its second-largest investor Bruce Berkowitz, who was also the former Sears director, has sold over 3.9 million company shares since last November. These dire conditions make it difficult for Sears to survive.

Though JCPenney is stepping up its apparel game, many fear that the actions taken are too late and will not help the retailer much, as it continues to lose money as well as its customers. The iconic department store chain, much similar to Sears, is struggling to adapt to the rapid shift in the retail landscape.

In the recently completed first quarter, the company reported adjusted loss of $69 million, that failed to meet the consensus estimate and lowered the outlook for the year. Sales in the recent quarter saw just 0.2% growth. JCPenney blamed cold weather condition for its disappointing performance. But this didn’t calm the frustrated investors, because Macy’s (M) on the other hand went ahead and posted strong quarterly results. This clearly hints towards the JCPenney’s bleak future.

Under the leadership of Marvin Ellison, the company has made several changes in its management and has cut more than 5000 jobs. This year alone it decided to cut some 360 jobs. The Plano, Texas-based retailer is making some bold attempts to fit into this new retail world, but with the existing financial hardships, it is not going to be an easy journey. Apart from limited sales growth, the company has a huge debt load of $4.2 billion. With no much time and money, JCPenney is eventually falling apart.

Who will be the first?

The last time JCPenney traded in double-digits was during December 2016. Since then the company stock has been trading down and it never touched double-digits again. On the other hand, Sears stock was trading in double-digits during May 2017 and for the past one year it couldn’t reach the double-digit figure and now it’s trading near the 52-week low of $2.11.

Both the companies are on the path to possible extinction. But, if Sears is the first one to go out of business, then JCPenney may get a second life and may witness some upward trend in its sales.