Rite Aid Corporation (RAD) met analysts’ expectations on earnings and topped them on revenues for the second quarter of 2019. Shares are up over 2% in premarket trade.

The company reported revenues of $5.4 billion for the second quarter of 2019 compared to $5.3 billion in the same period last year.

Adjusted net loss from continuing operations was $7.9 million or $0.01 per share, in line with market expectations. This compares to a net income of $17.4 million or $0.02 per share last year. 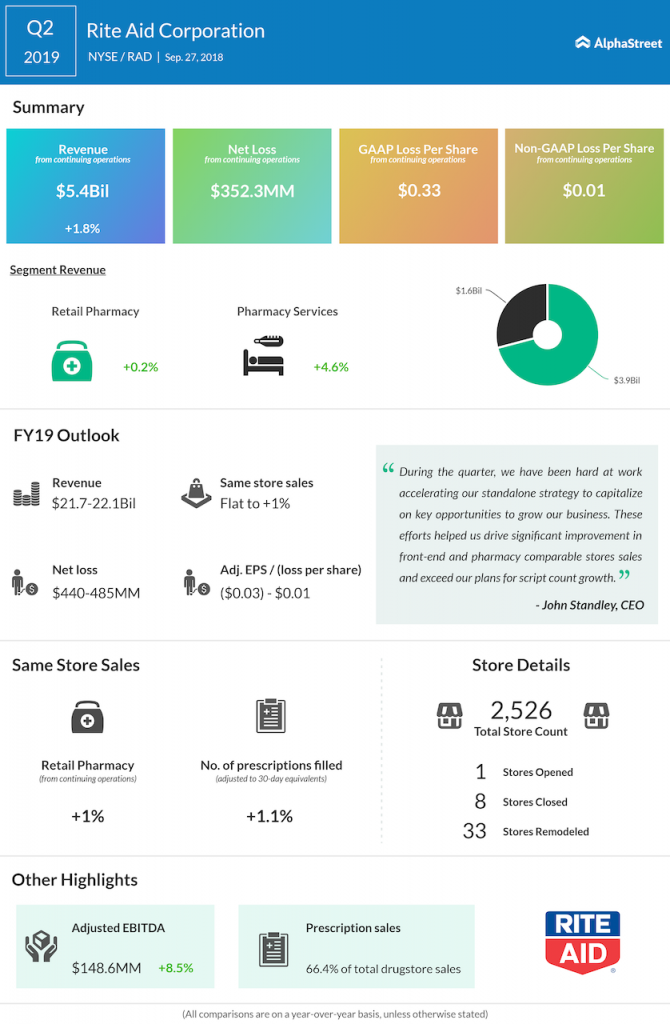 For the full year of 2019, Rite Aid expects revenues to be $21.7 billion to $22.1 billion and same-store sales to be flat to up 1%. The company now expects a higher net loss of between $440 million to $485 million due to impairment charges. Adjusted earnings are expected to come in between a loss of $0.03 per share and an income of $0.01 per share.

Rite Aid also announced changes to its board and governance. The company has separated the Chairman and CEO positions and is nominating three new independent directors to the board.

During the quarter, Rite Aid remodeled 33 stores, closed 8 stores and opened one store. Total store count at the end of the quarter was 2,526.

Last month, the company terminated its merger agreement with Albertsons Companies Inc. and said it was moving on with its growth strategy as a standalone entity.

Earnings Preview: Rite Aid might not turn a positive surprise