Earnings preview: Market looks beyond Q2 as Roku gears up for earnings

Television streaming platform Roku (ROKU) is all set to announce its fourth financial report since going public in September last year. When it releases the second-quarter numbers Wednesday after the closing bell, the California-based cable operator is widely expected to remain in the negative territory. The consensus estimate is a loss of 15 cents per share on revenues of about $142 million, which is broadly in line with the management’s guidance.

Investors will be more interested in knowing what is in store for Roku in the remainder of the year, considering the company’s bullish outlook for the quarter and the second half, which was upgraded several times citing strong business momentum. The revised estimates represent a significant growth compared to the second quarter of 2017.

The consensus estimate is a loss of 15 cents per share, which is broadly in line with the management’s guidance

The fact that analysts are also equally upbeat about Roku’s earnings points to a likely beat. That makes Roku a perfect bet for those planning to buy its shares before tomorrow’s announcement. The volatile stock has a history of making big moves during earnings announcements, which is typical of companies in their early stages of trading.

In the first quarter, Roku’s loss unexpectedly narrowed to $0.07 per share from $1.79 per share in the comparable period of last year. During the quarter, the high-margin platform revenue exceeded product revenue for the first time, validating the recent shift in the business model.

The optimists are encouraged by the company’s rapidly growing portfolio of streaming devices and tie-ups with smart-TV makers, in an industry that is evolving pretty fast. Moreover, in the recent quarters, Roku has been quite successful in raising its subscriber base consistently and getting viewers hooked to its platform for more hours, all the while competing with the likes of Google (GOOG) and Amazon (AMZN) in the area of streaming TV software.

When it comes to long-term prospects, one should not be surprised if Roku agrees to be acquired by one of its larger rivals for a big premium, riding the consolidation wave the streaming sector is witnessing.

Roku’s stock dropped about 10% since January this year, underperforming the S&P 500 index. After making some notable gains last week, the stock traded lower most of Tuesday’s regular session. 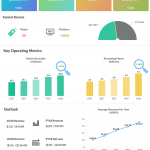