Cloud computing company Salesforce posted solid revenue growth along with a better-than-expected profit for its fourth quarter of 2018. Revenues for fiscal year 2018 were also up 25% year-over-year, above estimates. The company also raised its outlook for fiscal year 2019.

The stock slightly moved up shortly after the release of the strong results.

The San Francisco-based company saw strength in its cloud service offerings. Although Salesforce exceeded market estimates in subscriptions and support, it failed to meet them in professional services.

Unlike its competitors Microsoft and Oracle, Salesforce is unencumbered by non-cloud solutions, which in turn has helped it retain many customers.  The company is also working on developing tailor-made products for its customers to keep up with its competitors. This system has posted solid increases.

Salesforce is increasing its focus on global expansion to achieve its annual revenue target of $20 billion by 2021. However, the expansion to countries such as the UK, Canada and Japan has led to higher costs. Despite this, the company saw strong revenue growth in Europe, which is now its fastest-growing region. Salesforce also saw solid growth in Asia and the company remains optimistic on these two regions.

During the quarter, Salesforce entered into a strategic partnership with Google to combine its customer relations management platform with G Suite and Google Analytics. The company also strengthened its existing partnership with IBM. 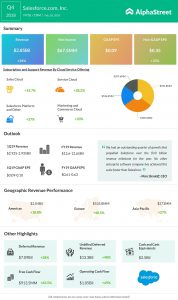