Snap bucks social-media curse; stock jumps as much as 10%

Snap (SNAP) reported a narrower-than-expected adjusted net loss of 14 cents per share during the second quarter as Daily Active Users (DAU) increased 8% to 188 million in Q2 2018. Revenue for the quarter jumped 44% to $262 million. Analysts had on an average expected a loss of 17 cents on a revenue of $251 million.

Snap shares gained as much as 10% in the after-market trading following the announcement.

Though DAU increased on a year-over-year basis, it declined 2% on a sequential basis. It also missed the Wall Street estimate of 192 million. However, average revenue per user (ARPU) increased 34% to $1.40 in Q2 2018, compared to $1.05 in the same period last year. 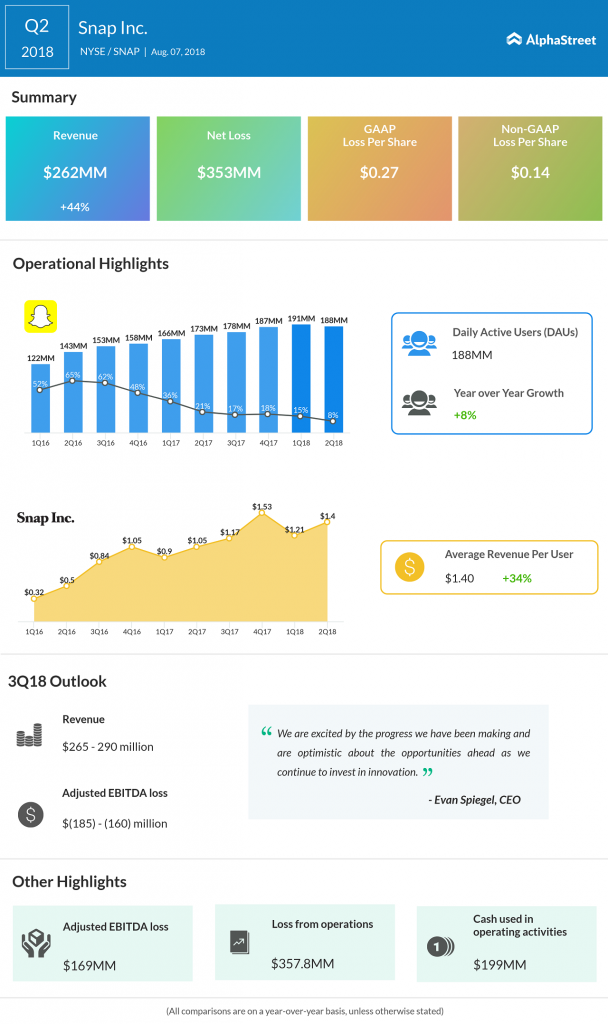 For the third quarter, revenue is expected to be between $265 million and $290 million, while adjusted EBITDA loss is projected between $185 million and $160 million.

Earlier, shares of rivals Facebook (FB) and Twitter (TWTR) plunged following the announcement of second-quarter results due to a slowdown in their user base growth. Those social media giants were also pounded by privacy and regulatory issues, primarily the newly launched GDPR.