Coffee chain operator Starbucks (SBUX) reported an increase in its second-quarter profit, in line with expectations. However, the company’s shares slipped as the outcome was not sufficient to ease investors’ concerns over its softening business in the US and the controversial arrest of two customers in Philadelphia.

Revenues climbed 14% year-over-year to $6 billion during the quarter, driven mainly by contributions from the recently acquired East China business.  While overall comparable store sales grew 2% during the quarter, helped by an increase in average ticket, traffic in the US remained nearly flat. 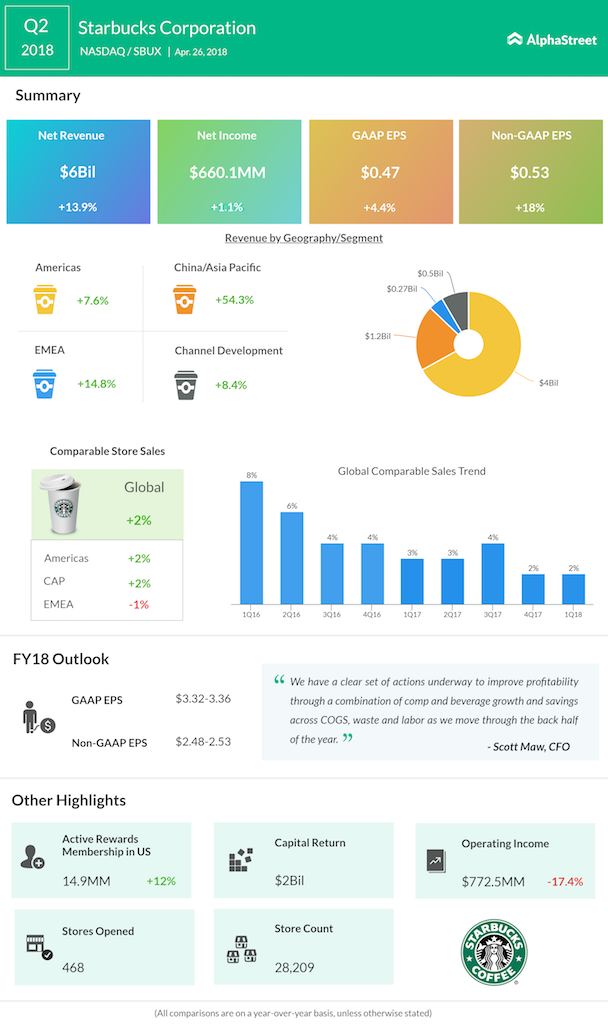 During the period, the Seattle-based company opened 468 new Starbucks stores and closed 298 Teavana stores, bringing the total store-count to 28,209. At the end of the quarter, there were 14.9 million Active Starbucks RewardsTM members, up 12% compared to the same period last year.

“We are continuing to invest in our business – strategically and with a ‘long game’ mentality – while at the same time taking decisive near-term action to maximize our brand portfolio and ensure that we continue to deliver outsized returns to our shareholders in the quarters and years ahead,” said Starbucks CFO Scott Maw.

Starbucks reaffirmed its global comparable store sales growth target of 3-5% for fiscal 2018, ideally near the low end of the guidance. Confirming its full-year revenue growth outlook in the high-single digits, the company said it continues to expect unadjusted earnings in the range of $3.32 to $3.36 per share and adjusted earnings between $2.48 and $2.53 per share.

In the wake of widespread criticism for the recent arrest of two men at its store in Philadelphia, allegedly on racial grounds, Starbucks will close its corporate office and more than 8,000 company-owned stores in the US on May 29 to impart training to employees on racial-bias.