As Twitter (TWTR) replaces Monsanto on the S&P500, the social media giant enters a new level in the stock market game. With other tech giants on a roll, including Netflix (NFLX) entering the S&P 100, this bullish behavior is even enjoyed by Apple (AAPL) and Microsoft (MSFT). The current growth enjoyed by Twitter is not limited to the S&P statement, but also to the double-digit growth in revenue in the first quarter of 2018. Twitter entered into the social-media competition in 2007, going up against industry giants like Orkut and Facebook (FB).

By employing a hitherto unseen social communication model, Twitter rapidly gained “followers” and established a firm root in the industry. These roots went further deep when Twitter went public in 2013. Fast-forward 5 years (well technically, 4 years and 7 months) Twitter still relishes the same momentum that it once did. Now let’s check if it is worth your time and money.

Ad revenue remains the most significant source of income for Twitter. The ad-engagement swelled 69% from last year along with it cost per ad-engagements have decreased 28% year-over-year. 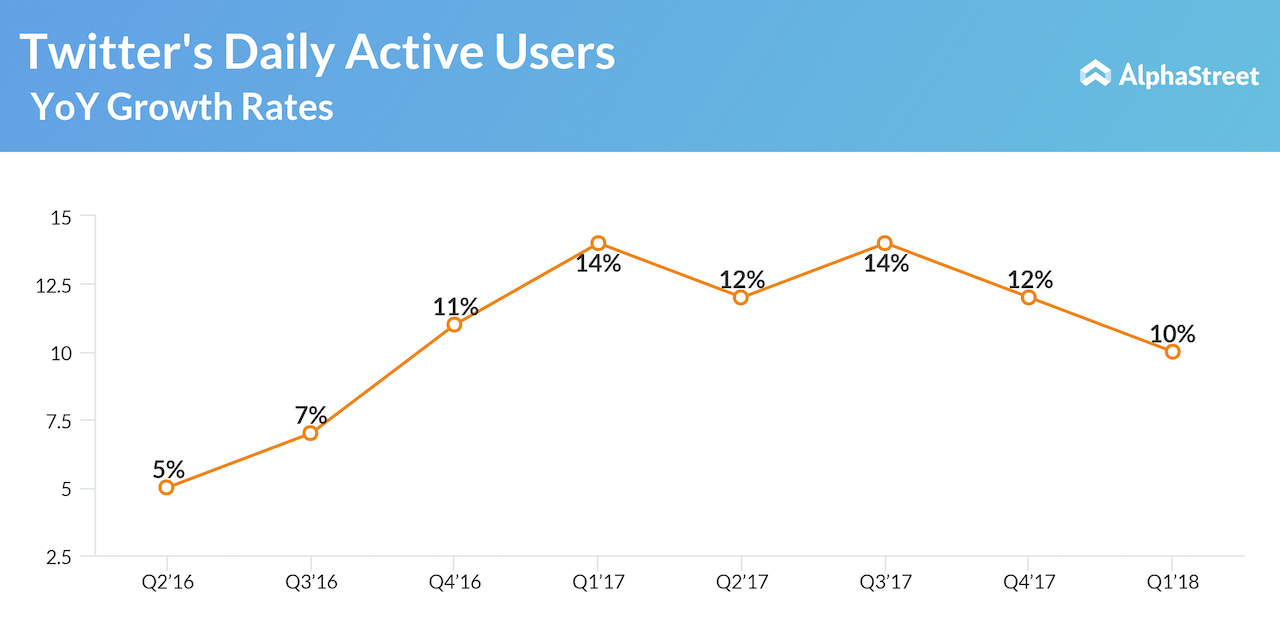 A major chunk of the ad revenue growth came from outside the US, which soared 51% to $287 million. If you inspect closely, the international market also contributes to the bump in growth to the total revenue. A good part of the international ad revenue came from Asia-Pacific with a focus on Japan with video content, and performance ad products in the China export market.

Twitter, in its shareholder letter, expects this trend to continue such that international ad revenue exceeds US ad revenue in future quarters. The majority of the ad revenue comes from video ads, which the company claims are their fastest growing ad format in Q1. Twitter was able to effectively profit from this as Clicks per Engagement (CPE) decreased heavily since videos have a lower CPE. 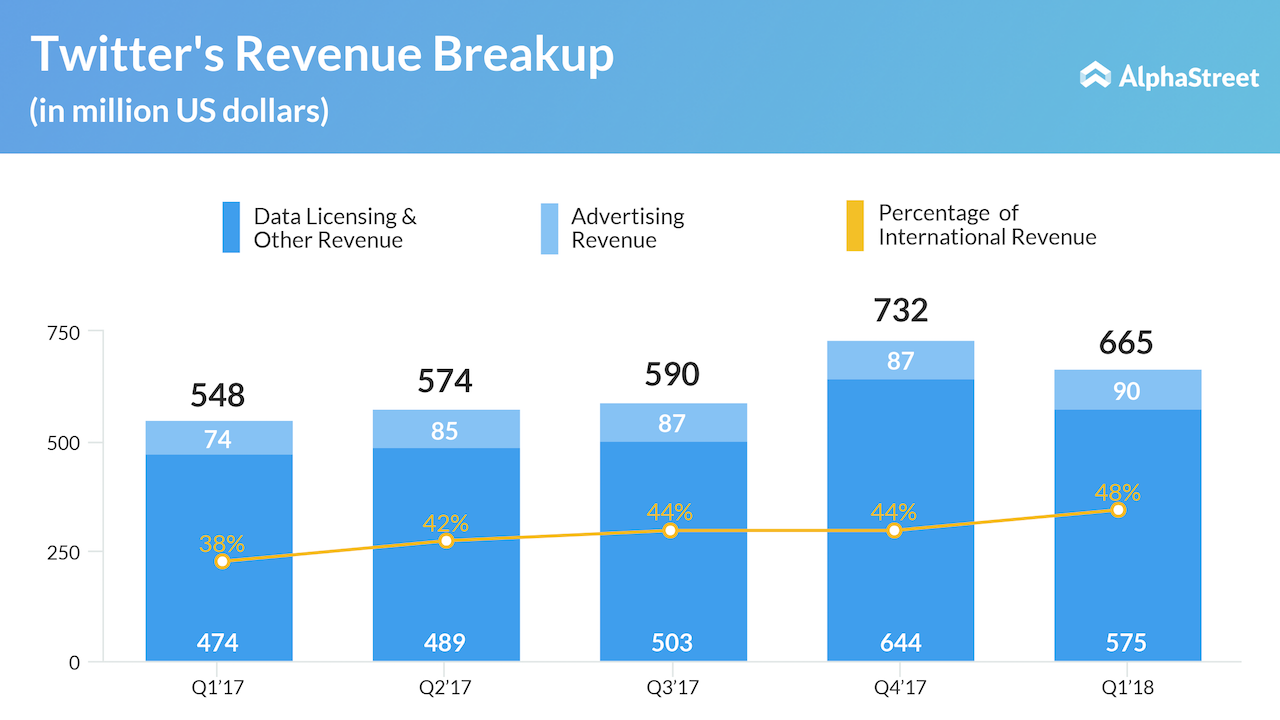 The same goes for Clickthrough Rates (CTR), and Twitter claims that their machine learning efforts are helping advertisers in targeting. Whatever the case maybe, the social media has provided advertisers in terms of better content formatting, and platform. The Owned and Operated (O&O) advertising revenue was $533 million, which is an increase of 28% year over year, yet a 10% decrease from last quarter. But that is to be expected of a typical Q4 to Q1 transition. Non-O&O advertising revenue was $42 million, a slump of 28% year-over-year from last year’s $58 million.

Total GAAP expenses were approximately flat year-over-year, and this is good for the buyers. This quarter marks their second consecutive quarter of profitability with a net income of $61 million, and a net margin of 9%. A non-GAAP basis, the income was $123 million with a margin of 18%. Adjusted EBITDA for Q1 is $244 million, or 37% of total revenue and 44% increase year-over-year. According to Kurt Wagner of Recode, Twitter stock is up about 115% over the past year, better than Google (GOOGL), Facebook, and Amazon (AMZN). 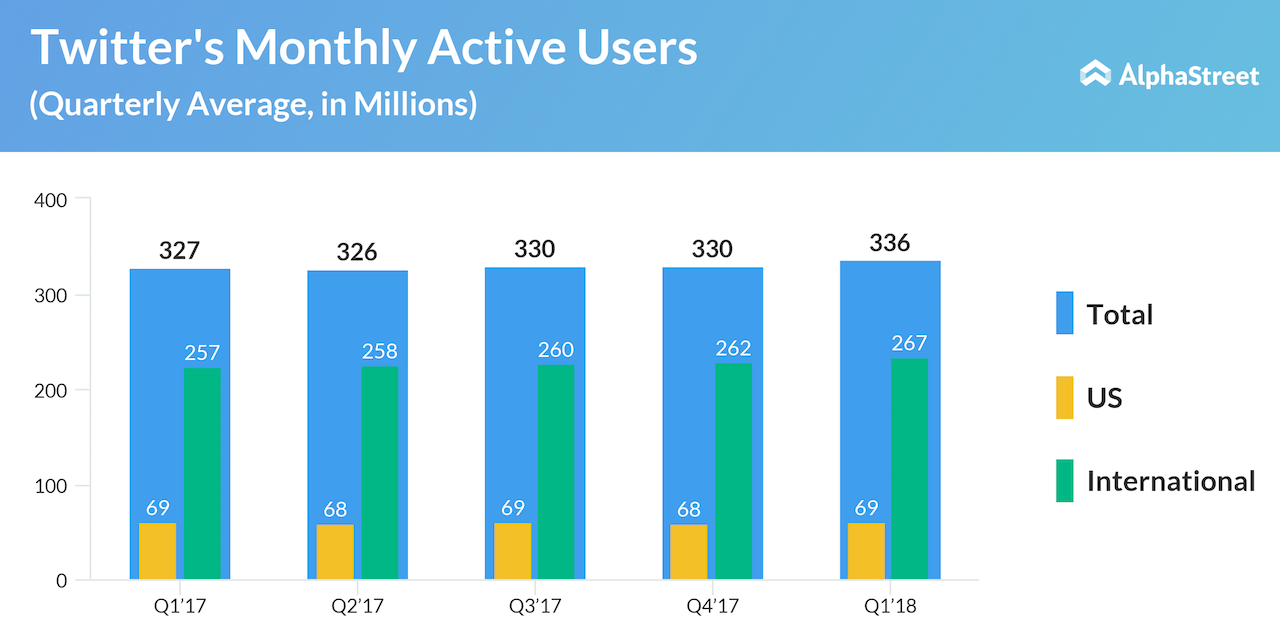 “The first quarter was a strong start to the year,” said Jack Dorsey, Twitter CEO. “We grew our audience and engagement, marking another quarter of double digit year-over-year DAU growth, and continued our work to make it easier to follow topics, interests, and events on Twitter. We also introduced a new framework to think more cohesively about the issues affecting our service, including information quality and safety. This holistic approach will help us more effectively address these challenges by viewing them through the broader lens of the health of the public conversation.”

The lifeline of the social media is a commonly relevant factor to all social media: the users. The user growth is relevant to the company in terms of revenue and survivability. The formula is simple: more users means more ad revenue. The Daily Active Users (DAU) increased 10% y/y. Monthly Active Users (calculated quarterly) increased 3% y/y with all of it coming from overseas and that’s the catch. US Monthly Active Users fell by a percentage – it’s not that huge a thing, but for a company based in the US to have its own citizens stay away from the application shouldn’t be a trend.

The price is going up, but with its own downs too. The last quarter isn’t the only one for Twitter. The company marked a profit for the first time in Q4’17 and is grateful that they can continue the trend in Q1’18. The year-over-year net income is still flat. The S&P report is beneficial to the company’s stock, so is the company strategy. Changing advertisement models, changing trends in user’s needs, even the new GDPR policy has its own effects on the price change. But the company employing their own strategies to counter-balance it merits its own appreciation.

The social media giant’s strategy in attracting an international audience has to be in terms with maintaining the regional users as well. But whatever change is happening to those shares is not a fluke. Twitter has kept a double-digit growth in DAU for the sixth straight quarter, and was able to maintain profit. As of now the tweets and tweeters have no other way to go other than up.