With competition mounting in the gaming industry, especially after the blockbuster entry of Fortnite, developers and publishers are busy revising their strategies. While customer experience is of paramount importance in the sector, Electronic Arts (AE) has done something that caused great disappointment to both gaming fans and investors.

The California-based company postponed the release of the latest edition of its first-person shooter game Battlefield by about a month. And, the result – the company’s stock lost about 10% Thursday hitting the lowest level since January.  Battlefield, considered to be one of the most realistic games in its genre, has a huge fan following and is the most popular among the company’s franchises, which explains the stock selloff.

“We’re updating our fiscal year guidance to reflect the updated launch date for Battlefield V, the ongoing impact of foreign exchange rate changes, and our current outlook for our mobile business. Our core businesses, including FIFA Ultimate Team, are strong, we think our players are going to love Battlefield V, and excitement is building for our new IP, Anthem,” said CFO Blake Jorgensen.

In its latest communiqué, the company also announced a downward revision of its financial outlook for fiscal 2019 to factor in the impact of the postponement on net bookings and variations in foreign exchange rates since the last guidance. The company currently expects full-year net bookings to be in the range of $5.55 billion to $5.20 billion. Meanwhile, it reaffirmed the second-quarter outlook provided in the most recent earnings report.

Shares of Electronic Arts hit a record high in late July but soon pared the gains after the company announced weak quarterly guidance, despite better-than-expected earnings. Throughout August, the stock traded broadly flat, before suffering a fresh loss Thursday. 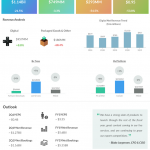