At $0.64 per share, first-quarter earnings were 60% higher compared to last year. Meanwhile, earnings were negatively impacted by a non-cash unrealized loss from forex re-measurement on Eurobond. Total revenues jumped 40% to $3.7 billion during the quarter. 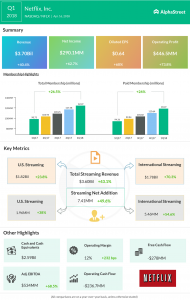 During the first quarter, the Scotts Valley, California-based company signed a deal with hit-maker Ryan Murphy, after forging similar tie-ups with Shonda Rhimes, Shawn Levy, and Jenji Kohan last year. With its subscriber growth in the US softening in recent months, the company’s strategy will be to focus more on the overseas market this year and beyond. 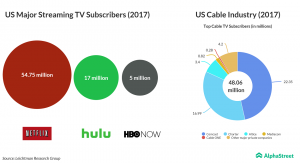 Interestingly, the impressive results indicate that the recent price hike has not affected investors and customers. In the fourth quarter, Netflix had raised the charges of its standard and premium plans by one dollar.

Netflix’s shares grew around 6% in the after-hours Monday, paring the loss it suffered during the regular trading hours. The stock gained more than 60% so far this year, marking the biggest gain by any S&P 500 company during that period.