Over the past few months, there has been a lot of bad press involving several leading airline companies which would have painted a bleak picture of the aviation industry as a whole in the minds of people. Fortunately, that does not seem to be the case. According to the J.D. Power 2018 North America Airline Satisfaction Study, overall airline passenger satisfaction came in at 762 points out of a total of 1,000 points, an increase of 6 points, reflecting a consistent trend of improvement over the past seven years.

The study, which measures passenger satisfaction from seven factors including cost and fees, in-flight services, reservation among others, based its findings on the responses of more than 11,500 passengers who traveled during the period between March 2017 and March 2018.

The survey revealed that increased investments by the airlines drove the improvement in overall passenger satisfaction in making its airplanes more comfortable for passengers as well as making their flight experience altogether easier. This included improving the entire process of ticket reservations, baggage check-in, entering and exiting of the aircraft along with increased overhead storage space within the aircraft. 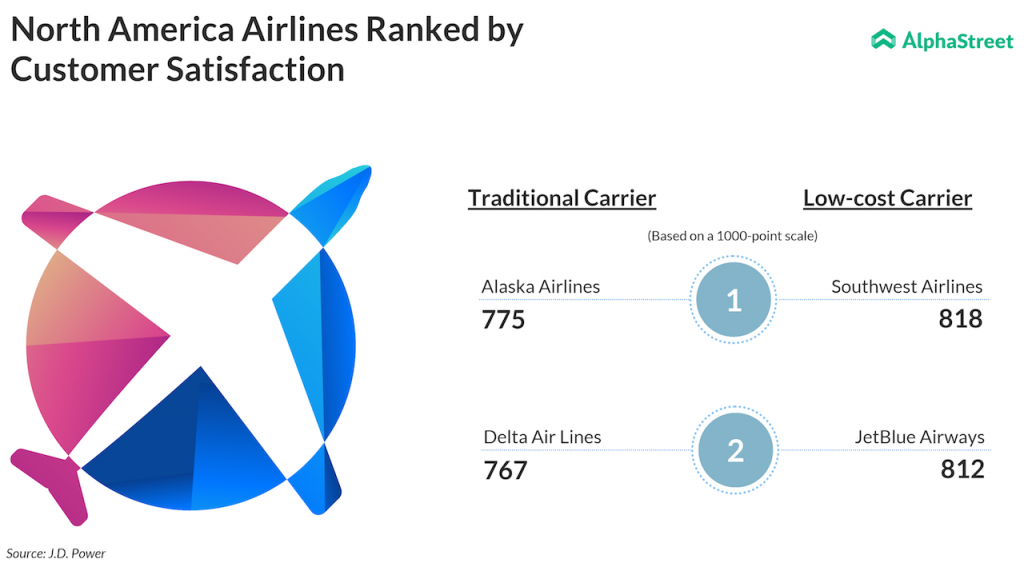 Among traditional carriers, Alaska Airlines secured the top place with a score of 775 points

However, the satisfaction level of customers was low in terms of the in-flight experience which comprises of food, beverage and entertainment options on the flight. Customers continue to be dissatisfied with the in-flight entertainment options as well as the inability to use electronic devices onboard the flight. Airlines are still struggling with Wi-Fi technology upgrades in this matter.

Among traditional carriers, Alaska Airlines (ALK) secured the top place with a score of 775 points. Alaska has maintained its stellar position for the past 11 years, performing well in all seven factors, with particular emphasis on its storage space improvements. Delta Airlines (DAL) stands at second with 767 points.

United Airlines (UAL), which had a very rough year with the passenger-dragging incident and several animal deaths, fell to the bottom of the list which does not come as a surprise. United said it was training its customer-facing staff to handle problems and deal with passengers in better and more compassionate ways.

Looking at low-cost carriers, Southwest Airlines (LUV) captured first place with 818 points thanks to its fleet improvement. JetBlue Airways (JBLU) came second with 812 points. The carriers which improved the most from last year were Allegiant and Air Canada, which stood at 725 and 734 points respectively. It appears that the airlines are on the right flight path in terms of improvement and customers are quite happy with where they are going.