T-Mobile US (TMUS) reported Q2 earnings and wireless customer additions that both topped analysts’ views. The company reported its quarterly results for the second time after it announced a merger deal worth $26.5 billion with Sprint (S). Revenue was up 4% to $10.6 billion and profit per share surged 37% to $0.92. Shares of T-Mobile rose 1.5% in late trading.

For the quarter ended June 30, 2018, the telecom company added 1.6 million total customers, including 686,000 branded postpaid phone customers. The year-over-year increase in branded postpaid phone customer additions was aided by continued growth in existing and Greenfield markets, the growing success of new customer segments namely, T-Mobile for Business, T-Mobile ONE Unlimited 55+ and T-Mobile ONE Military, along with record-low churn.

For 2018, T-Mobile lifted its outlook for the postpaid net customer additions to a range of 3.0 million to 3.6 million compared to the prior target of 2.6 million to 3.3 million. The company expects branded postpaid phone ARPU in full-year 2018 will be generally stable compared to full-year 2017, excluding the impact from the new revenue standard. 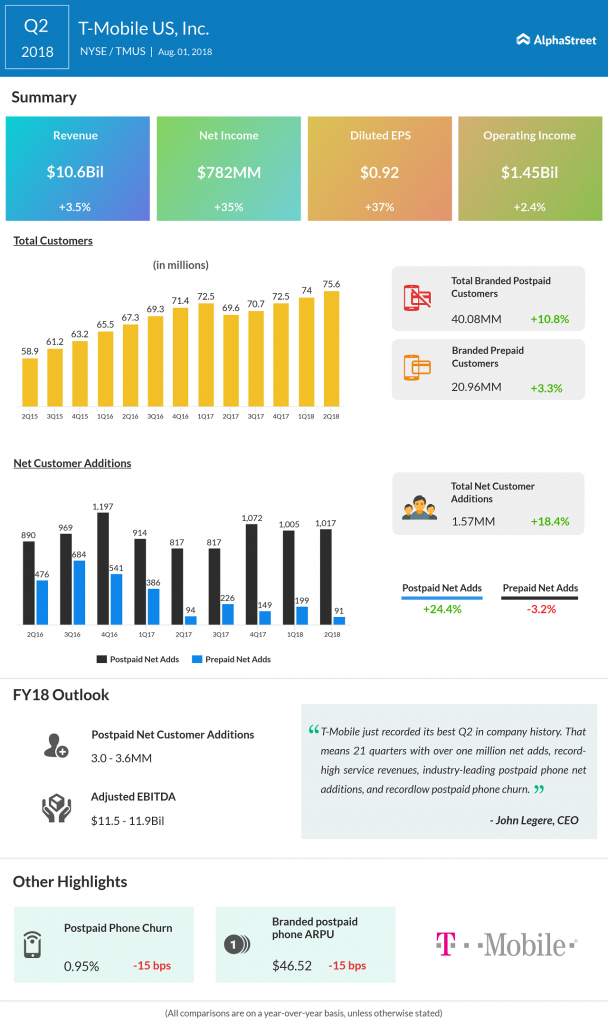 Just two days back, T-Mobile entered into a $3.5 billion deal with Nokia to build its 5G network. This deal will help the Bellevue, Washington-based company to compete with rivals AT&T (T) and Verizon (V).

Before the bell, Sprint reported its first-quarter earnings results which beat the consensus view. However, the T-Mobile merger outweighed Sprint’s results and the stock traded down about 1% when the market ended today.

The proposed Sprint transaction is expected to close in first half of 2019, subject to regulatory approvals. On July 18, 2018, the FCC issued a Public Notice formally accepting T-Mobile’s applications for approval of the proposed deal and the Commission established a period for public comment.

T-Mobile stock dropped 1.07% to $59.36 at the end of today’s regular trading session. Shares of the telecom operator have dropped about 6.5% so far in this year and about 6% over the past year.

Related: A glance at T-Mobile-Sprint merger