Eight out of the top 10 value-creation stocks compiled by BCG came from technology or semiconductor industries. Nvidia (NVDA) and Netflix (NFLX) bagged the top two spots in the list, in which companies were merited on the basis of the stocks’ total shareholder return (TSR) for the five year period between 2013 and 2017.

Unsurprisingly, chipmaker Nvidia tops the list with a five-year TSR of 76.1%, closely followed by streaming giant Netflix with 70.7%. This means these two companies returned maximum returns to shareholders in the past five years making investors richer faster. Trailing a bit behind is Broadcom (AVGO) at rank 3 with a TSR of 54.6%. 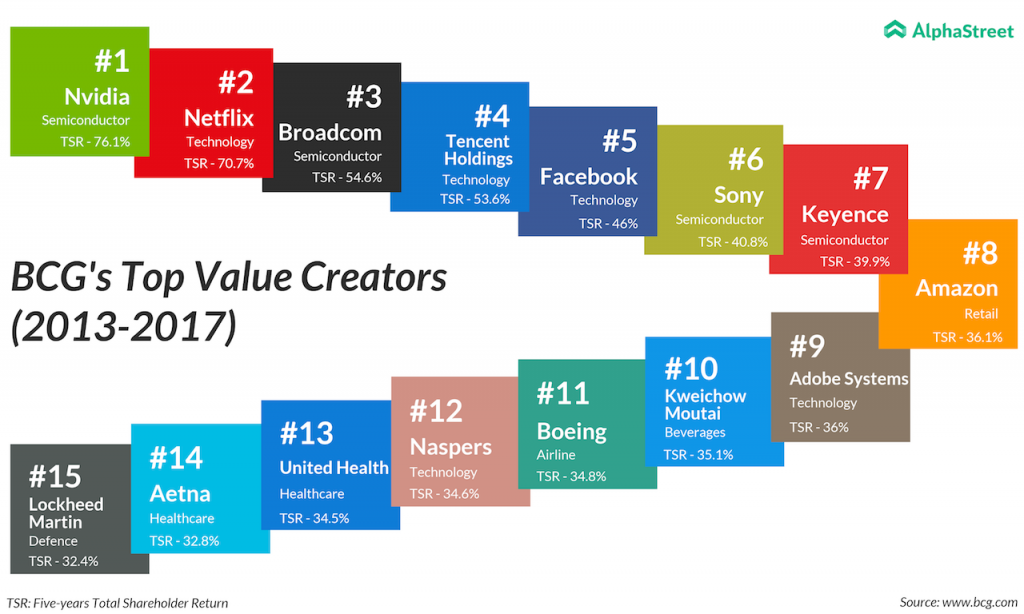 While Chinese company takes Tencent Holdings takes up the fourth spot, Facebook (FB) strikingly makes it to the top five in its first year of qualification (the ranking requires the companies to have traded as a public company for at least five years).

Amazon (AMZN) and Chinese beverage company Kweichow Moutai are the sole representatives of other industries in the top 10, at the eighth and tenth spots respectively. Other major US tech firms to feature in the list of 50 companies include Adobe Systems (ADBE) in the ninth spot, Microsoft (MSFT) in the 20th spot, Altaba (AABA) at 21 and Alphabet (GOOGL) at 36. Notably, Apple fails to make it in the list.

RELATED: NVIDIA just shrunk a man into a miniature car in jaw-dropping demo

Media, healthcare, aerospace and defense were some of the other industries that performed relatively well in the rankings. Healthcare and aerospace firms accounted for five of the best 20 companies, led by Lockheed Martin (LMT) and UnitedHealth Group (UNH).