IPO Alert: Tencent will list its online music arm in the US

Chinese internet mammoth Tencent Holdings on Sunday announced that it might spin off to list its online music unit in the United States. Tencent now owns China’s largest music-streaming company. This proposal, which comes in the time of trade tensions between the US and China, also points to the fact that the online music industry is regaining its might, with growing audiences in streaming services.

This April, another music giant Spotify listed itself. It is to be noted that Spotify has a 9% stake in Tencent Music and Tencent Holdings owns 7.5% stake in Spotify, according to a Thomson Reuters data.

Roughly, Tencent Music might be valued north of $25 billion, with an estimated IPO of up to $4 billion. The terms are yet to be revealed, as the short regulatory filing (HKeX filing: http://bit.ly/TencentAnnouncement) did not mention it.

The stringent voting rights rule in the Hong Kong exchange is touted to be one of the reasons more tech firms are looking to the west to list, as the HKeX failed to attract Tencent’s music arm.

However, all is not lost for the Eastern Exchange as smartphone giant Xiaomi recently raised about $4.7 billion through its IPO in Hong Kong, making it the world largest tech IPO in the last four years. As the HKeX opened on Monday in Hong Kong, the Chinese phonemaker’s shares inched about 3% lower.

A worthy rival to Apple Music

Tencent Music was formed through a merger with China Music nearly two years ago and is currently the largest music streaming service in China. It also enjoys a strong competitive advantage in the country compared to Spotify and Apple Music as Spotify is yet to enter China while Apple Music is less popular in the Red Dragon country.

The parent company, Tencent Holdings, is also involved in gaming and making movies through its Tencent Games and Tencent Pictures businesses, with Tencent Gaming being the world’s biggest gaming firm in terms of market cap and revenue. The company’s online publishing business Tencent Literature made a stunning debut through its IPO in 2017 which saw its shares almost double in early trading.

Worldwide music revenues are said to have hit $17 billion last year with music streaming revenues raking in at least $7 billion– a 39% year-on-year jump. With the strong worldwide revenues forecasted in the music industry, the road ahead seems positive for Tencent Music. So it is a hot stock worth noting.

Tencent and Alibaba still among the highest valued global brands

Chinese greats Tencent and Alibaba (BABA) recently secured spots among the top 10 most valuable brands in the world. In this year’s BrandZ Top 100 Most Valuable Global Brands list that came out in May, Tencent secured the fifth place with Alibaba at number nine. 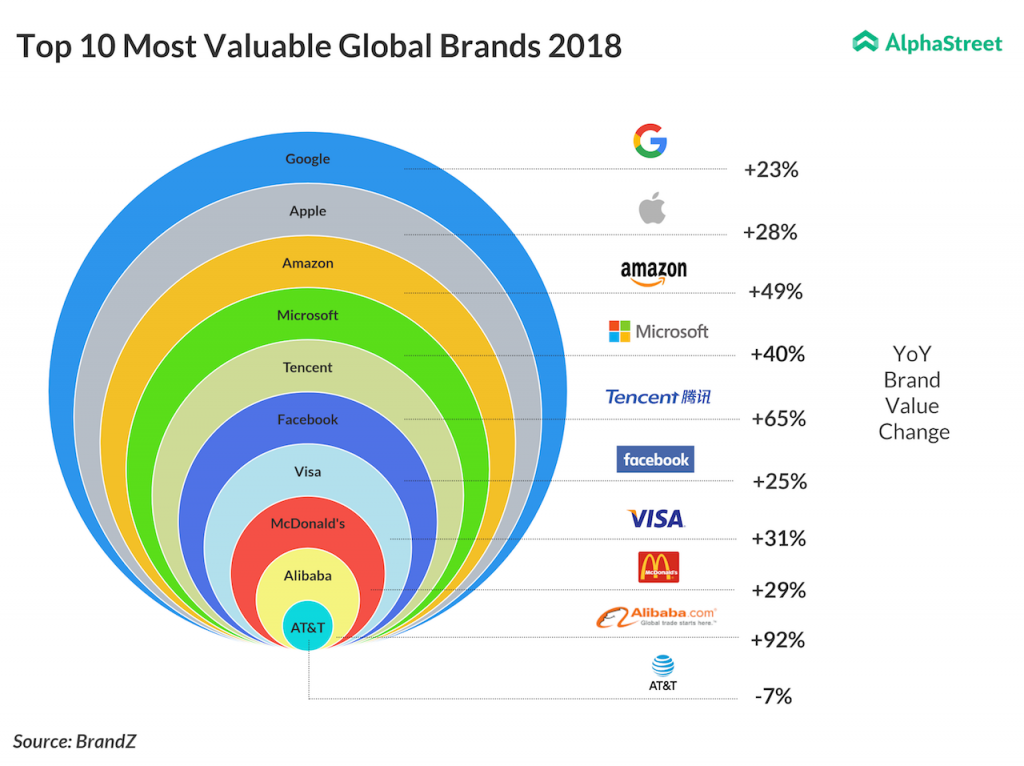 Google (GOOGL) tops the list with a brand value of $302 billion, reflecting a growth of 23% from last year. Google has managed to retain the number one position for the past eight years.

Verizon (VZ), Coca-Cola (KO) and Disney (DIS) have made it to the top 20 while Nike (NKE), PayPal (PYPL) and Walmart (WMT) have been ranked at 29, 30 and 31 respectively. Vodafone (VOD), despite seeing a 9% decline in brand value, managed to top the list of UK brands.