Texas Instruments (TXN) reported that its CEO Brian Crutcher has resigned on the grounds of violating company’s code of conduct. Rich Templeton, the current Chairman of the Board, will additionally reassume the roles of president and CEO for an indefinite period.

“For decades, our company’s core values and code of conduct have been foundational to how we operate and behave, and we have no tolerance for violations of our code of conduct,” said Mark Blinn, lead director of the TI Board. The company added that the violations are linked with Crutcher’s personal behavior and not related to operations.

Crutcher, who had worked in TI for about 22 years, became the company’s SVP in 2010, EVP in 2014 and COO in 2017. In January of this year, he was named as the successor for then CEO Rich Templeton with effect from June 1. It’s an irony that Crutcher, who was commented as “an exceptional leader who inspires others and delivers great results” by Rich Templeton had resigned on violating the company’s ethics and core values.

The semiconductor company also reported that second quarter revenue grew 9% year-over-year to $4.02 billion. EPS of $1.40 included a $0.03 discrete tax benefit, which is not given in the company’s original outlook. TI is scheduled to report its Q2 results on July 24.

Shares of TI, which were up 1% in today’s regular trading session, dropped 2% after the company announced the leadership change. 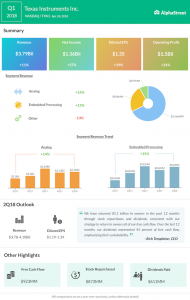