Last year was a turnaround year for the IPO market when American stock exchanges witnessed around 50% growth in the number of companies going public. The initial trend in this year indicates that the overall IPO activity will be more hectic during the remainder of the year. Though the fundraising exercise is currently led by the tech and healthcare service sectors, there is broad-based industry participation.

With a whopping $10-billion private valuation, California-based cloud service provider Dropbox (DBX) is the poster boy this year. Sharing the top spot with Dropbox, Swedish music streaming firm Spotify (SPOT) went public through an unconventional direct listing in April. Both the companies were widely expected to come up with blockbuster IPOs, considering their fast-growing market share and customer base.

Market watchers see these two relatively successful stock market debuts as the harbinger of a series tech IPOs this year and beyond. It is expected that some of the leading technology firms, which have hitherto relied on private investors for capital, will be jumping on the IPO bandwagon in the coming months. 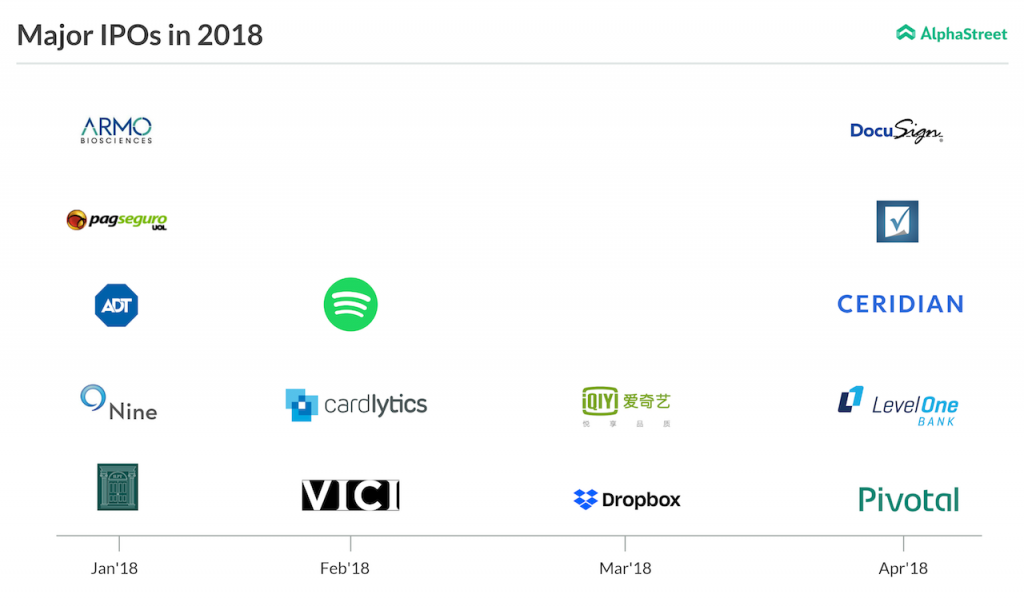 Though tech unicorns Airbnb, WeWork and Pinterest are yet to go public, after having raised handsome amounts through private funding, it is unlikely that they would put off their IPOs forever. Considering the number of big firms still staying private and the phenomenal growth of the two major US bourses and the S&P 500 since last year, 2018 could a banner year for IPOs.

The increasingly robust IPO market saw proceeds surging to multi-year highs in the first quarter, setting a perfect backdrop for more financial and tech firms to enter the public realm in the second half of the year.

Though the early part of the year witnessed some not-so-successfully IPOs by non-tech entities such as security company ADT Inc. (ADT), which was acquired by private equity group Apollo Global Management in 2016, there were others like medical research firm ARMO BioSciences (ARMO) who are trading above their opening price after a pretty good start.

However, the most delighted among the investors are those who bought Dropbox shares in the first quarter. The stock surged around 36% on March 23, the day it started trading on the Nasdaq Stock Exchange pursuant to one of the most anticipated IPOs.

After joining the Nasdaq fold, shares of DocuSign and SmartSheet gained 68% and 8%, respectively. Another firm that witnessed a marked post-IPO rally is Cardlytics (CDLX). The stock is currently trading higher by 87%, after recovering from an initial dip in the first few days after the company debuted on Nasdaq. Pivotal has a similar story to tell, with the stock gaining steadily after the IPO to clock an overall growth of more than 80%.

In the streaming segment, Spotify was joined by yet another foreign company – iQIYI (IQ), often referred to as the Netflix of China, raised $2.3 billion by selling American depositary shares at $18 apiece. Since its March 29 debut, IQ’s price has more than doubled, and Spotify is up by around 17%. Meanwhile, Spotify raised quite a few eyebrows by doing away with underwriters and promotional activities, allowing stockholders to sell their shares directly to the public.

An emerging trend in the IPO market is the influx of China and Hong Kong-based companies into the American stock market, and their number has increased manifold since 2016. Interestingly, most of the Chinese firms raise more than their US counterparts. In addition to iQIYI, which made the second largest IPO so far this year, eight more Chinese firms started trading in the US stock exchanges in the first three months of 2018.

Those who have been waiting for long to grab the shares of Uber will be disappointed this year too, for its CEO Dara Khosrowshahi believes it is appropriate for the company to go public sometime in 2019. While the ride-hailing giant remained private for various reasons, the general feeling among some of the big private firms is that the complex regulatory procedures have made it a difficult task to take companies public.

Meanwhile, analysts are of the view that the IPO recovery that began last year is a bit slow compared to the fast-growing stock markets. And, the generally cited reason for the tepid growth is a lack of clarity in the tax reform legislation proposed by the government last year. While the tax cut bodes well for IPOs, the volatility that gripped the market immediately after the new legislation could slow down the activity in the near term.

Dropbox files for IPO with a valuation of $7.6 billion