The eBay bull is capable of charging at bearish hurdles

eBay (EBAY) is one company that often gets underplayed in retail industry discussions. While it stays safe from most of the challenges faced by its brick-and-mortar counterparts, it is still consistently under the shadow of the Amazon (AMZN) threat. Yet, the company has been able to capitalize on consumer sentiments and optimism to ensure stock movement in the right direction.

eBay is one of those companies where bulls and bears have enough fodder to back their respective arguments and outlook about the company. However, in retrospect, we feel the bullish prospects are stronger than the bearish ones. Let’s take a look.

eBay has implemented numerous innovative measures to maintain the company’s position in the rapidly-changing retail landscape, including its decision to spin-off its subsidiary PayPal (PYPL) into an independent company in 2015. This move is expected to have huge repercussions in the coming years, with eBay recently announcing that, starting 2021, PayPal will no longer be its primary payment channel. The online market platform hopes to make deeper inroads into foreign markets by allowing various payment methods. Besides providing a stimulus to margins, the move also gives eBay greater control over checkout pages, which in turn, helps in streamlining conversions.

Also, influenced by the popularity of online discount store Wish.com, eBay this month launched an “Under $10” category of items with free shipping, a feature that was earlier implemented by Amazon. The company is also working to implement numerous AI features into its system, including an option where the users can click and upload the image of a product, and the site shows its own products that resemble the image and the brand.

All that said, the company’s performance over the past few quarters has not been impressive, given the fact that the company falls under the prestigious category of online digital retailer. Revenue growth has more or less been between 6% and 8%, while active buyer growth has failed to break out of the 5% deadlock. Gross Merchandise Volume growth has also been between stuck in single-digit, both domestic and international. 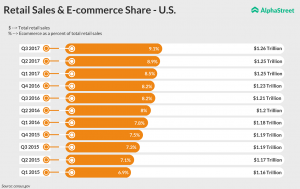 It’s true that the performance has been consistent, but we hit a wall the moment we compare this growth with its peers. Revenue growth during the recent quarter was 38% for Amazon, 39% for JD.com (JD), 56% for Alibaba (BABA) and 46% for Wayfair Inc (W). eBay is not even close.

Direct competition posed by Facebook’s (FB) marketplace is also an area of concern for eBay, given that more social media channels may follow these footsteps and capitalize on their already existing user networks.

eBay hopes to tackle all these challenges through payment intermediations in e-commerce as well as its StubHub or classifieds business. The online retailer had also recently purchased the Japanese unit of Giosis to set a firm footing in the Asian markets.

The stock has almost doubled in the past two years. And taking into consideration all the above-stated prospects, we are satisfactorily convinced that eBay is taking necessary measures to strengthen its weak points, which will help it continue its upward stroll.