On Wednesday, the effect of many things converged to a scary day of falls with the biggest stock selloff since February. The S&P 500 fell 3.29% intraday while the Nasdaq saw its worst day in the last seven years. The ripple effect was felt all around the globe as it rolled over to Europe and Asia, destroying 4-6% of the value in the markets on the Eastern side of the globe. So, is this a one-off event, or is it a warning sign?

With the Fed bumping up treasury yield rates on the day that bond markets were closed, it saw a stark reaction as it resumed with a sell-off. The bond sell-off, along with that of stocks led to a disastrous situation in the red, as more investors started buying Yen against the Dollar. It is to be noted that they stayed away from both gold and Bitcoin here.

Shortly after hitting the 3.25% mark, the 10-year Federal Treasury Yield rate slipped to 3.15%. The dollar took a hit, but it also meant other currencies were appreciated. Turkey Lira was up 0.84% earlier today while the Euro was up 0.25%.

Too many macro reasons spoil the broth
Now let’s take a few causes that led to this. Firstly, the rising Treasury yield rates had started worrying people. Along with it, was the overvaluation of tech stocks. With the unimpressive launch events and the latest privacy debate, many factors hit the tech sector showing its place.

We also saw momentum sellers shedding assets. The US PURE MOMENTUM Index slipped 0.48% on Wednesday to 1,032.46. That, along with the bond and equity sell-offs put the market in a precarious position.

The trade war also lent its hand, as many leading companies came out with statements that they were getting affected by the “cold-war like tensions.” The latest luxury stock issue is one such example. Reports suggest that Chinese border guards are sending back luxury bags to the country and restricting their entry to a brand-conscious market such as China.

The bull market and rising rates also led to a very confident streak in general investors, enough to make many complacent. The volatility and fear indices with respect to the major markets were recently reduced due to the robust growth when more people got complacent even in a background that showed signs of unsustainability as we pointed out in our earlier reports.

Even now, many people think Wednesday’s bear attack was a one-off incident and it will pass. One other way of looking at this is like a pivot point instead. As Wednesday’s state carries over to today and goes further, people will get more nervous and the bull market will find getting back even harder. 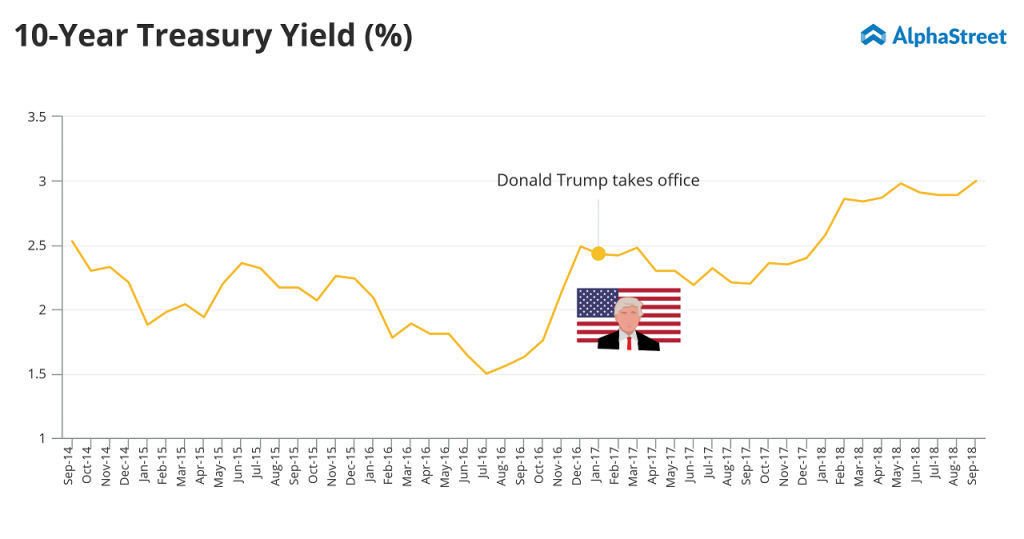 Later on Wednesday, POTUS Donald Trump bashed the Federal Reserve for its alleged uncontrollable behavior in raising rates, especially with higher frequency in the past few months. The US Treasury Secretary, Steven Mnuchin, however, was of the opinion that the market is merely correcting itself.

As the market goes on a corrective mode, it seems that the combination of many small factors is what led to the disastrous show on Wednesday. Will the situation continue and trigger further sell-off is yet to be seen. However, we don’t think it is time to head to the hills yet. Instead, it would be great to let go of the complacency and see the market as it is, and not a bull run that it was poised to be.

Will Trump’s tax reform save the banking sector?

[DISCLAIMER: This post is an opinionated piece and does not necessarily share the views of AlphaStreet Inc.]