Shares of apparel and footwear retailer Tilly’s Inc. (TLYS) gained sharply Wednesday after it reported better-than-expected earnings and revenues for the second quarter when comparable store sales rose at the fastest pace in two years. The company also provided guidance for the third quarter.

Net sales of the Irvine, California-based company grew 13.4% year-over-year to $157.4 million during the three-month period. The top-line benefitted from the shift in the retail calendar this year, which caused some of the back-to-school season to advance into the second quarter. There was a 4.4% increase in comparable store sales, with physical store sales and e-commerce sales growing by 3.8% and 8.1% respectively.

The top-line benefitted from the shift in the retail calendar, which caused some of the back-to-school season to advance into Q2

“Tillys delivered its strongest comparable store net sales result since the third quarter of fiscal 2016, and we believe we have our e-com business back on track The back-to-school season is off to a strong start, and we feel optimistic about the back half of fiscal 2018,” said CEO Ed Thomas.

For the third quarter, the company is looking for net sales in the range of $145 million to $151 million. Earnings are forecast between $0.20 per share and $0.24 per share.

Among peers, American Eagle Outfitters (AEO) earlier reported strong profit and sales for the second quarter. The company’s stock dropped sharply after its earnings guidance for the third quarter fell short of expectations.

Shares of Tillys, which gained about 24% since the beginning of the year, closed Wednesday’s regular session slightly higher. The stock rose about 8% in the extended trading hours after the earnings report, reaching the levels seen in the initial days after listing on the Nasdaq Stock Exchange. 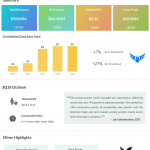