Transocean Ltd (RIG) continued its losing streak that began more than a year ago and posted a narrower than expected loss in the second quarter helped by strong revenue efficiency, exceeding 97%, and higher activity as the quarter marked the first full operations for all five of its newest ultra-deepwater drillships. Revenues came in above estimates during the quarter.

The Switzerland-based offshore drilling company, which has its U.S. operations headquartered in Houston, stayed in the negative territory for the fifth consecutive quarter, posting a loss of $2.46 per share in the second quarter of 2018 compared to a loss of $4.32 per share last year.

Contract drilling revenues rose 12% annually to $790 million during the quarter. The results were favorably impacted by higher revenue efficiency and utilization on the company’s ultra-deepwater fleet.

The company further strengthened its balance sheet and extended its liquidity runway by negotiating a new $1 billion revolving credit facility extending into 2023, refinancing debt associated with the Songa acquisition, and executing on a secured facility for the Deepwater Pontus.

During the quarter, Transocean purchased a 33% interest in the newbuild, harsh environment semisubmersible Transocean Norge (formerly the West Rigel) through a joint venture with Hayfin Capital Management LLP.

In the quarterly fleet status report, Transocean has added about $405 million in contract backlog since the previous report. As of July 23, the company’s backlog is $11.7 billion, which includes dayrate reductions on four of its newbuild drillships related to cost de-escalations attributable to down-manning.

Transocean’s competitor Diamond Offshore Drilling (DO) reported an adjusted net loss of $0.33 per share for the second quarter, compared to a $0.38 per share loss analysts had projected. Halliburton (HAL) posted a 24% growth in revenues for its most recent quarter.

Transocean’s shares gained 1.5% in the after-hours trading session following the impressive earnings report. The stock ended Monday’s regular trading session up 3.60% at $13.38 on the NYSE. Shares have shown an upward trend, rising by 54% for the past year and by 25% for the year-to-date. 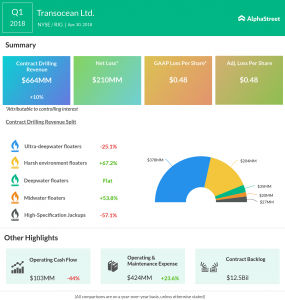