Meat manufacturer Tyson Foods Inc. (TSN) has been aggressively expanding its product portfolio in recent months through strategic acquisitions. Continuing its transition from a broiler company into a diversified producer of prepared foods, under CEO Tom Hayes, Tyson Monday signed an agreement to acquire Keystone Foods for about $2.16 billion. The new addition is expected to give a further boost to the company’s value-added protein capabilities.

The buyout is in line with Hayes’ long-term plan to grow the business both ‘organically and inorganically.’ The deal, the biggest for Tyson since the acquisition of AdvancePierre Foods Holdings last year, assumes significance considering the softness in the American processed meat industry and the ongoing trade war. Despite the challenges, the Springdale, Arkansas-based Tyson had to fight with multiple rival bidders before clinching the deal.

Keystone, based in West Chester, Pennsylvania, caters to some of the leading food companies and quick-service restaurant chains such as McDonald’s. It also operates in some key Asian markets and Australia, besides having a strong presence in seven states in the US.  Also, the company supplies value-added items like chicken nuggets, beef patties and breaded fish fillets to various retail stores. Brazil-based Marfrig Global Foods owns it. While the US market accounts for more than two-thirds of the company’s revenues, it is consistently gaining traction in Asia.

“This acquisition will expand our international presence and value-added production capabilities and help us deliver more value to our foodservice customers. We look forward to serving customers with these additional capabilities and to welcoming Keystone’s dedicated team members to the Tyson Foods family,” said Hayes.

According to reports, post-acquisition, Marfrig will continue to operate one of the hamburger factories in the US. For Marfrig, the divestment of Keystone marks a significant shift in strategy as the company will now be focusing more on its beef business, mainly in the US and South America.

Meanwhile, the purchase price was revised down from the previously announced $3 billion, probably to factor in the demand-supply imbalance and unfavorable pricing scenario in the US meat products industry. 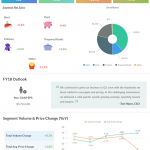