Under Armour paces past sales estimates in first quarter

The year 2017 had been awful for the athletic apparel and shoe maker Under Armour (UAA) as it struggled to survive the challenging retail environment in the US. The company that is acing its turnaround managed to beat sales estimates during its first quarter.

From start to finish, 2017 was terrible for the retailer. The company’s share during the year fell 50%. Under Armour was mostly criticized for missing on a huge opportunity, as it failed to notice the athletic apparel shift towards more fashionable outfits. This miss in trend was seen as a billion-dollar blunder made by the company as it only led to steeper declines in performance.

This year, so far, Under Armour’s shares went up 25% in the hope that the company will revive its sales. And it looks like the company is picking momentum as the company reported 6% growth in its revenue to $1.18 billion, topping analysts anticipation. This growth was mainly due to improvement in its international sales as well as growth within the apparel segment. Investors seemed pleased as the company shares went up 4% during the pre-market trading. 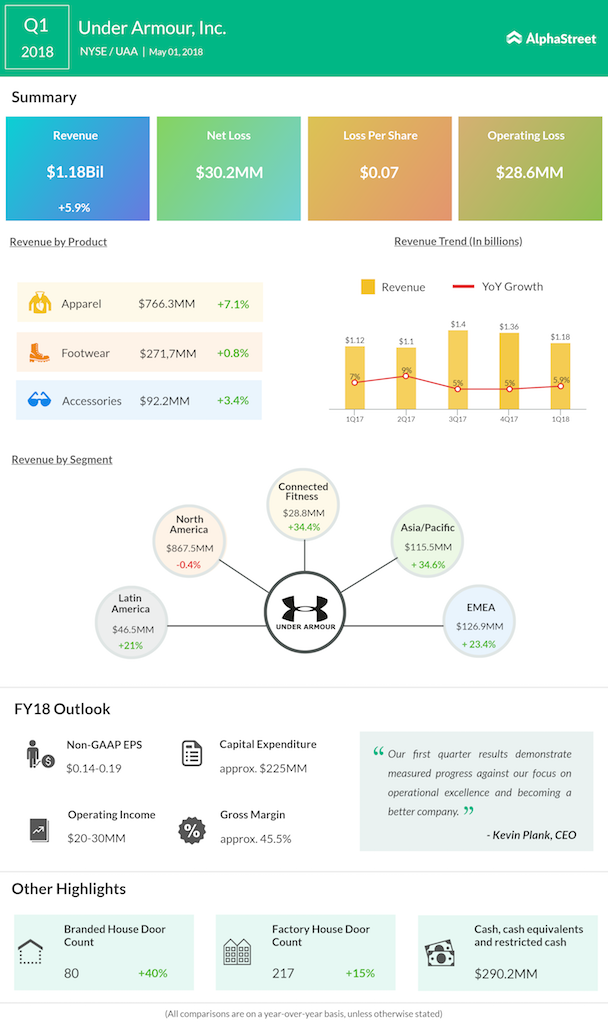 Under Armour’s target market was also one of its biggest problems, as the retailer lost most of the market share to its competitors Adidas and Nike (NKE). And to reverse the continuous decline in sales, the company even withdrew itself from smaller sports categories and focused mainly on its lucrative products. This helped Under Armour,  as it reported just 0.4% drop in its revenue in North America to $867 million. This marks a good improvement, considering the 4.5% decline in North American sales during 4Q 2017.

Despite the growth in revenue, the Baltimore-based company’s net loss widened to $30.2 million, or $0.07 per share. Restructuring charges of $37 million impacted the company’s earnings.  Excluding the charges, the company reported earnings of $1 million.

The company reiterates its outlook for the full year 2018. Revenue is expected to be up at a low single-digit percentage. Excluding the impact of the restructuring efforts, adjusted diluted earnings per share is expected to be in the range of $0.14 to $0.19.